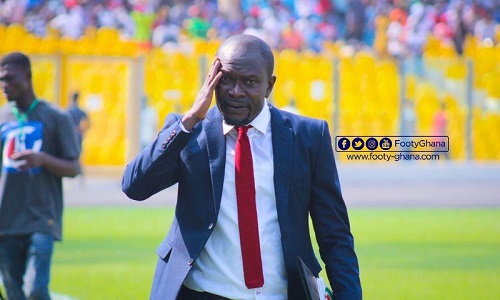 Prosper Harrison Addo, General Secretary of the Ghana Football Association has disclosed the Black Stars coach Charles Kwablan Akonnor and his assistant David Duncan willingly accepted for their monthly salaries to be slashed.

According to Prosper Harrison Addo, the technical team of the senior national team agreed to a pay cut because they wanted to contribute their quota to the nation amid the Covid-19 outbreak.

"The two (CK Akonnor and David Duncan) agreed during the COVID period that they would like to contribute something, so the Ministry of Youth and Sports also embraced," Prosper Addo said.

"I personally wanted the two coaches to go out there and say since it was their involvement, willingness to do this so that they would tell the public."

"I am of the view that some of these things are best left to the people involved."

However, the statement from the GFA's General Secretary contradicts what the Minister for Youth and Sports, Isaac Asiamah said last week.

The Sports Minister made it known in an interview that, he has instructed the former Hearts of Oak and Asante Kotoko coach to accept a pay cut.

“I have told the coach [Akonnor] to accept a salary cut in the Covid-19 period before we pay him," Asiamah told Asempa FM.

"We cannot give him a full salary in the Covid-19 era, and we are waiting for a response from the FA.

“The coach has agreed in principle to accept a salary cut in this Covid-19 era, it's left with the FA to come out with the modalities for us to pay him."

CK Akonnor and David Duncan were appointed in January as Black Stars head coach and assistant respectively. However, the duo have not received their monthly salaries since their appointment.

Akonnor last week named a 23-man Black Stars squad ahead of his maiden game. The four-time AFCON champions lock horns with Mali in an international friendly on October 9 in Turkey.