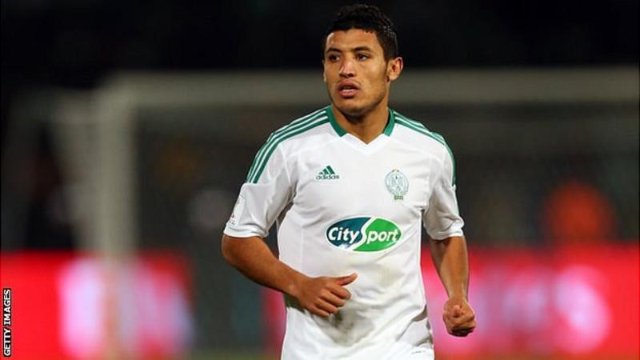 Abdelilah Hafidi's goal gave Raja Casablanca a 1-0 win away to Enyimba in the first leg of their African Confederation Cup semi-final.

Abdelilah Hafidi scored his first Confederation Cup goal since March to give Raja Casablanca of Morocco a 1-0 semi-final first-leg win away to Enyimba of Nigeria on Wednesday.


He struck early in the second half in Aba to put Raja in a strong position in their semi.

In the other game, Egypt's Al Masry were held to a goalless draw at home by AS Vita Club of DR Congo.

The second leg matches will take place later this month.
Raja took the lead thanks to a quick free-kick from their half with Hafidi latching on to a low cross to fire past goalkeeper Theophilus Afelokhai.

It was the first Confederation Cup goal for Hafidi since he scored in a qualifying win over FC Nouadhibou in Mauritania and only the second conceded by Afelokhai in five matches.

Enyimba wasted a great chance to equalise midway through the second half when Stanley Dimgba blasted a penalty over the bar after a Moroccan handball.

The return match takes place on 24 October in Casablanca.

In the later game in Egypt, hosts Al Masry stretched their unbeaten run in the competition to 13 games but were held to a goalless draw by AS Vita Club of DR Congo.

Read also:UCL: Liverpool suffer 1-0 defeat to Napoli
Vita Club have won every one of their home matches in this competition this season and so will be confident of winning through after the second leg in Kinshasa.