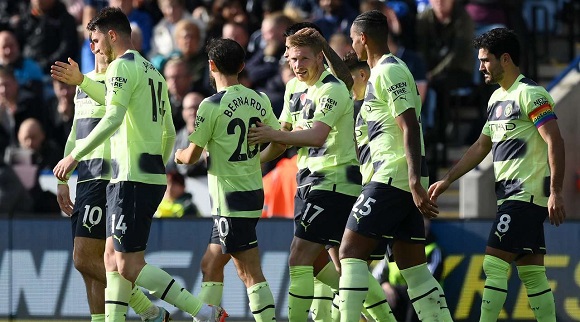 Manchester City sealed a 1-0 win over Leicester City at the King Power Stadium to move to the top of the Premier League table.

Pep Guardiola’s side were dealt a blow before kick-off as Erling Haaland had to be left out of the matchday squad due to a combination of both illness and injury.

It was a familiar sight for the majority of the first half, as City dominated possession whilst the Foxes sat back in their compact shape to try and frustrate. It looked to be working for Brendan Rodgers’ side, as both teams went into the break without troubling the score.

City, however, had other ideas at the beginning of the second period as they came out with intent. Three minutes after the restart, they had the lead courtesy of a moment of brilliance from Kevin De Bruyne.

The Belgian struck a free-kick from 25-yards out past Danny Ward and into the back of the net, with the ball taking a touch off the post on its way in.

Leicester almost responded four minutes later with their best chance of the game, but Youri Tielemans’ dipping volley from the edge of the area was helped onto the crossbar by the fingertips of Ederson, who made an outstanding save.

City saw out the remainder of the match to go one point clear of Arsenal at the summit ahead of the Gunners’ match against Nottingham Forest on Sunday.