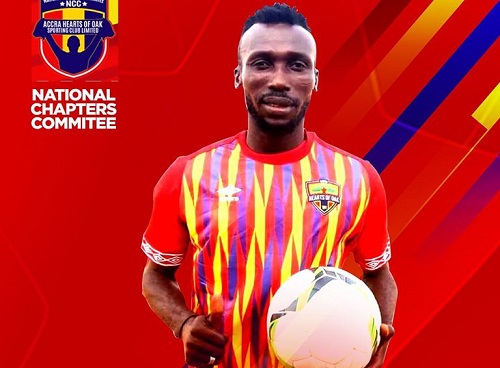 Midfielder Emmanuel Nettey has expressed gratitude to the supporters of Hearts of Oak after being voted the club's Player of the Month for January.

The former Inter Allies player beat off competition from Joseph Esso and Raddy Ovouka, in doing so became the first player to scoop the prestigious award.

An elated Nettey took to Facebook to thank the fans and reckoned that the award will spur him on to work hard to restore the club's glory days.

"Thank you to the fans who voted me for the player of the month..itâ€™s very important for me and I think it will motivate me work much harder for the club.. when weâ€™re out there on the field itâ€™s the fans who drive us on and theyâ€™re always there to try and give us that bit extra when we play both home or away even when we might be tired and today wasn't an exemption...I think they are really important for us and I hope they can continue getting behind us like they are doing currently and hopefully we the playing body would put in 100% to help achieve the club's objectives for the season."

Nettey is expected to receiveÂ a cash prize of GHC2000 after chairman of the National Chapters Committee (NCC) of Hearts of Oak, Elvis Hesse Hermann this week disclosed that player of the month for the club will be awarded the said amount.

According to him, the supporters have decided to award outstanding performers particularly the player of the month which will serve as motivation for other players to work hard.