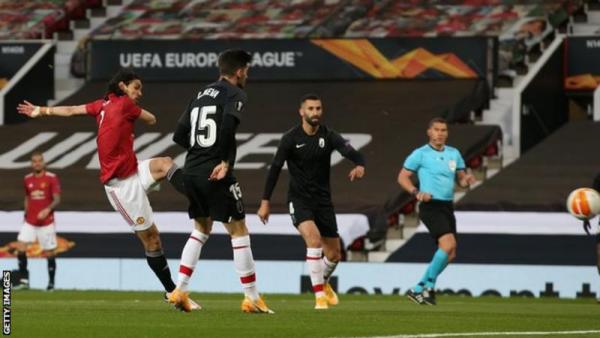 Edinson Cavani's first-half volley was the highlight as Manchester United eased past La Liga side Granada at Old Trafford to book a Europa League semi-final with Roma.

Leading 2-0 from the first leg of their quarter-final in Spain last week, Cavani took away any lingering doubt over United reaching the last four when he provided a smart finish to Paul Pogba's sixth-minute flicked header.

United scored a second in stoppage time when Jesus Vallejo turned Alex Telles' cross into his own net.

As Roma came through a nervy night at the Stadio Olimpico against Ajax, it means a reunion for United old boys Henrikh Mkhitaryan and Chris Smalling, who has been sidelined in recent weeks with a knee injury.

It was a notable night for Cavani, whose his first European goal for United was his 50th in total in continental competition.

It was the 34-year-old's ninth of the season overall and will intensify talk about whether he will sign an extension to his contract, which expires at the end of June.

Elsewhere, Arsenal impressively swept aside Slavia Prague to reach the Europa League semi-finals with a fine away victory in the second leg.

The night had potential to be a nervy affair with the tie evenly poised at 1-1, but the Gunners produced one of their best performances of the campaign to keep alive their hopes of European qualification for next season.

They scored three goals in the opening 24 minutes and had another ruled out by the video assistant referee - all-but ending the contest in the opening period.

Nicolas Pepe squeezed home at the near post to open the scoring in the 18th minute before Alexandre Lacazette converted a penalty three minutes later following a foul on Bukayo Saka.

Saka coolly swept in the third as Arsenal tore their Czech opponents apart once more.

Mikel Arteta's side controlled the game expertly thereafter and Lacazette smashed his second low into the net in the latter stages.

The Gunners will face Villarreal - managed by former Arsenal boss Unai Emery - in the last four.

Manchester United meet Roma in the other semi-final after Ole Gunnar Solskjaer's side comfortably saw off Granada.