Everton beat Liverpool at Anfield for first time since 1999 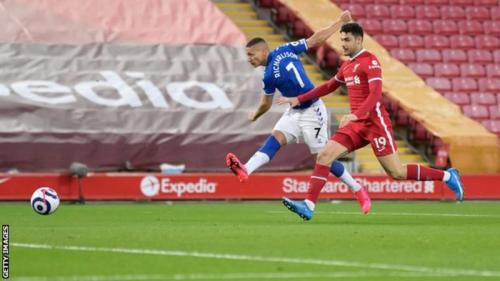 Everton secured a first Premier League win at Anfield in 22 years as goals from Richarlison and Gylfi Sigurdsson dealt a blow to Liverpool's top-four hopes.

Richarlison opened the scoring in the third minute when he was played in on goal by James Rodriguez - the Brazilian driving a low finish across Alisson.

Jordan Pickford then made a number of important saves to deny Jordan Henderson, Sadio Mane and Mohamed Salah as the hosts tried desperately to get back level.

However, Dominic Calvert-Lewin was brought down inside the box late on and Sigurdsson confidently scored from the spot as Everton secured a famous win that moves them level on 40 points with the Reds.

Liverpool, with several players unavailable, also suffered a further injury setback as Henderson limped off in the first half.

Defeat for Liverpool continued the defending champions' poor form in the Premier League as they have now lost their past four fixtures and are three points behind fourth-place Chelsea.