Ex-Hearts of Oak MD pleads with Ghanaians to forgive Wakaso 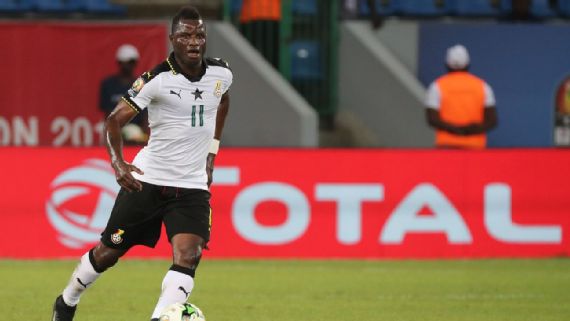 Former Hearts of Oak Managing Director, Neil Armstrong-MortagbeÂ has appealed to Ghanaians to forgive Mubarak Wakaso following his comments thatÂ NDC and NPP are destroying the Black Stars with politics.

TheÂ Jiangsu Sunning midfielder in a interview said nation's two big political parties NDC and NPP are among the reasons behind the Black Stars' failure at major tournaments.

Wakaso told Angel TV: I will speak the truth today. Do you know our problem about the game?

''Maybe we know but we donâ€™t want to say it. But I think politics ruins the Blacks Stars at times. When NDC is in power, NPP doesnâ€™t want us to win and vice versa.''

A statement which generated a lot of controversy and Wakaso suffered backlash from thousands of Ghanaians who disagreed with him.

The 29 year-old on Wednesday apologized for his comments andÂ FIFA Marketing Consultant, Neil Armstrong is urging Ghanaians to forgive him.

â€œFor some of us who have been in this game for so long and given Mubarak Wakasoâ€˜s immense contribution to the national team and the level of commitment heâ€™s always shown, I will plead with all Ghanaians to forgive him.

â€œItâ€™s good that he has recognized his mistake and has duly come out to apologize. A lot of times people in similar situations wouldnâ€™t be so keen to take responsibility for their actions but the young man has done the honorable thing and deserves to be forgivenâ€

Neil further said he found it hard to believe the story initially because the said player is not someone who is media friendly.

â€œWakaso is not the type of player who usually talks to the media or makes public statements regarding the various national teams. So it came as surprise to me when I first heard news.â€Â

â€œIn fact I was convinced it was a fabricated story at first because Iâ€™ve followed Wakaso long enough to know this is the type of comments i wouldnâ€™t attribute to him. But upon further checks I gathered he indeed made those claims but heâ€™s also come out to withdraw the statement and begged for forgiveness.â€Â

Armstrong concluded by advising Wakaso to learn from his mistake and be circumspect in his submissions to the media in future.