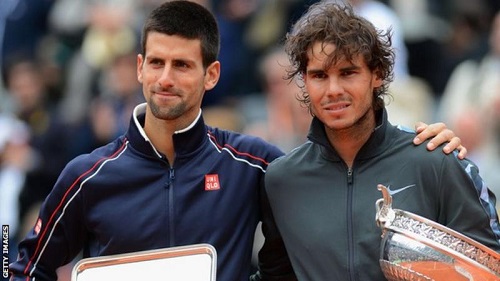 Djokovic and Nadal have played 10 times at the French Open, with the Spaniard winning seven and the Serb - who retired injured from their first meeting in 2006
Shares

Novak Djokovic says he is ready for the "biggest challenge one can have" at the French Open when he plays 13-time champion Rafael Nadal in a much-anticipated quarter-final on Tuesday.

The pair, who have 41 Grand Slam titles between them, continue their rivalry with a men's record 59th meeting.

The match starts at 19:45 BST in the Court Philippe-Chatrier night session.

"I like the way I've been feeling, the way I'm hitting the ball. I'm ready," said defending champion Djokovic.

Spain's Nadal, who is still finding his best level after recent fitness issues, added: "I haven't played these kind of matches for three months so it is going to be a big challenge for me."

Fifth seed Nadal, 35, has not played Serbia's Djokovic since he lost to the world number one in last year's semi-finals on the Paris clay.

Djokovic, 35, leads 30-28 in the head-to head record after he handed Nadal just his third loss at Roland Garros.

Nadal moved ahead of Djokovic and Switzerland's Roger Federer in terms of Grand Slam men's singles trophies when he won a record 21st title with victory at the Australian Open in January. 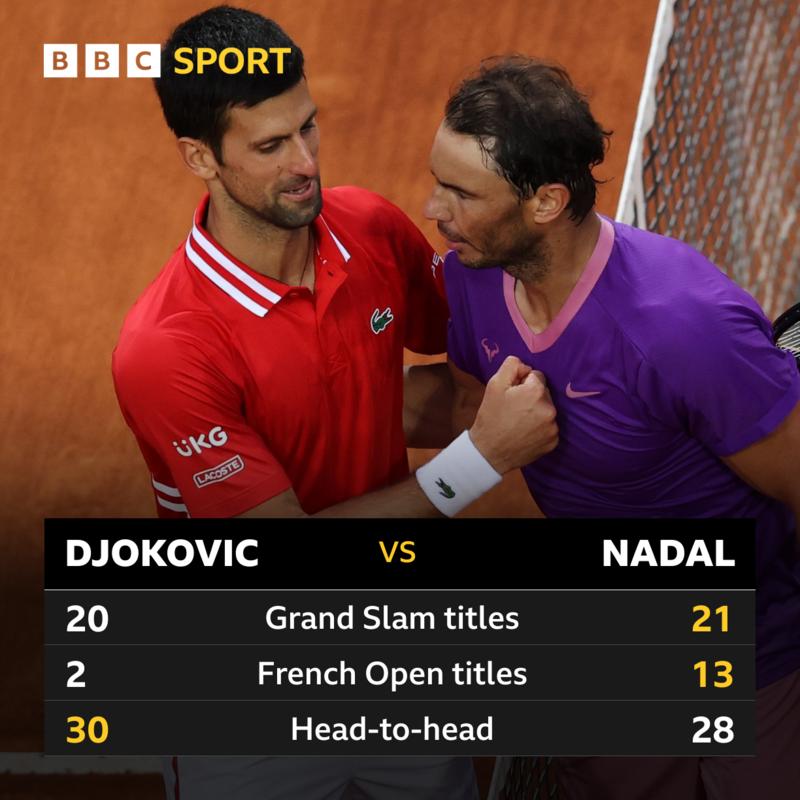 Eyes have been drawn to a potential last-eight meeting between two of the sport's greats ever since the draw was made.

Two-time champion Djokovic was the first of the pair to advance to the quarter-finals, beating Argentine 15th seed Diego Schwartzman to maintain his record of not dropping a set at Roland Garros this year.

Nadal dropped sets for the first time in his last-16 match against Canadian ninth seed Felix Auger-Aliassime but recovered to win an absorbing five-set match.

"It was obviously a well-anticipated match I think when the draw came out for a lot of people," said Djokovic, who has spent eight hours and 13 minutes on court in his four matches - two and a half hours less than Nadal.

"I'm glad that I didn't spend too much time on the court myself up to quarter-finals, knowing that playing him in Roland Garros is always a physical battle, along with everything else."

Djokovic has been building up towards his peak form in recent weeks following a disrupted start to the 2022 season.

The 20-time Grand Slam champion was deported from Australia and not allowed to play at the year's opening Grand Slam event, then banned from entering the United States to play at Indian Wells and Miami because he was not vaccinated against Covid-19.

After an early exit on his competitive return at Monte Carlo, he has since continued to improve and came into the French Open on the back of winning the Italian Open in Rome.

On the prospect of facing Nadal on Chatrier, he added: "It's a huge challenge and probably the biggest one that you can have here at Roland Garros.

Nadal determined as ever but 'happy' to be in latter stages

Nadal made a sensational start to the 2022 campaign and enjoyed what he described as the "most unexpected" win of his career by beating Russia's Daniil Medvedev in the Melbourne final.

Last year, Nadal feared his career was over because of a chronic foot problem which restricted him to only one tournament in the final seven months of 2021.

Following his success in Australia, Nadal's momentum was stalled when he suffered a stress fracture of his rib at Indian Wells in March.

The injury meant he missed six weeks of the tour, returning to action in Madrid to reach the quarter-finals but then seeing the foot problem flare up again during the Italian Open.

"Two weeks and a half ago, even if I had good hopes after Rome, I didn't even know if I would be able to be here," Nadal said.

"So I'm just enjoying the fact that I am here for one more year. And being honest, every match that I play here, I don't know if it is going to be the last match here in my tennis career. That's my situation now.

"I am just trying to enjoy as much as possible and fight as much as I can to keep living the dream."

Even before the two players won their respective fourth-round ties, there had been talk about when the match would be scheduled.

Nadal is known to prefer playing in the hotter day conditions which suit his top-spin forehand, leaving Djokovic perhaps happier to have a night session.

Other considerations for French Open organisers were the demands of television rights-holders and falling short in their commitment to having gender equality in the split between men's and women's matches in the prime time night slot.

In the end it was picked for the night session - starting at 8:45pm local time in Paris.