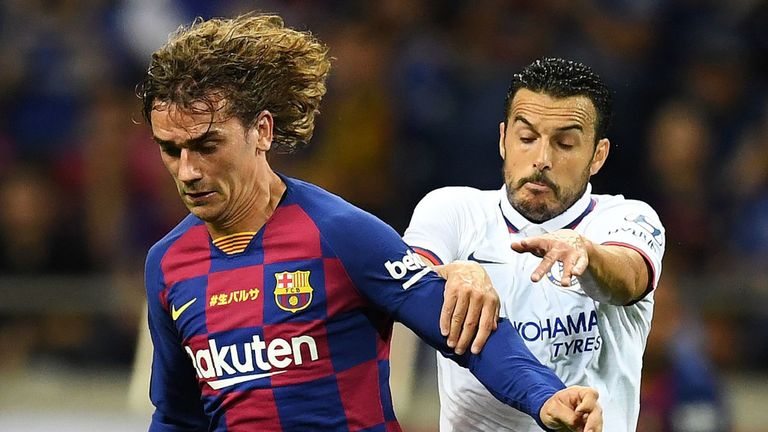 Antoine Griezmann was making his first appearance for Barcelona

Tammy Abraham scored his first goal of pre-season as Chelsea produced an impressive showing to beat Barcelona 2-1 in Japan.

The Blues should have already been ahead by the time Abraham opened the scoring 11 minutes before the break after he skied a sitter moments earlier, but he made no mistake second time around when Jorginho robbed Sergio Busquets and from his pass, the forward rounded Marc-Andre ter Stegen and slotted in.

An entirely rotated Barcelona side showed more after half-time but rarely tested Chelsea goalkeeper Kepa Arrizabalaga, and instead the Blues added a late second when Ross Barkley smacked the ball inside Neto's near post with nine minutes remaining.

But Barcelona did have something to smile about in added time when substitute Ivan Rakitic received the ball 20 yards out, and after taking a single touch fired in a powerful effort into the top corner beyond a helpless Kepa.

How Chelsea saw off Barca
Chelsea may have been wondering whether it would be a long night when Barcelona flew out of the blocks and only avoided taking a second-minute lead when Oriol Busquets nodded over unmarked from a corner.

But once Chelsea got their bearings, they controlled the first half against a strong Barca side, albeit playing their first game of pre-season, who struggled to deal with a high press and compact defence.

The Blues' full-backs bombed on with aplomb and should have led when Emerson found Christian Pulisic inside the box, and his shot was turned away straight into Abraham's path. The striker had an open goal to aim at - but lifted his first-time effort over the bar.

Abraham made no mistake second time around when Chelsea's high press worked to perfection, as Jorginho caught Sergio Busquets in possession and played Abraham through, and he calmly rounded Ter Stegen and fired in the opener.

The first half provided little attacking opportunity for Barca after that early header, with debutant Antoine Griezmann frustrated by the Blues' stout defence, but straight from the restart they began to probe more intensely, and Malcom fired wide of the near post within two minutes.

Young winger Carles Perez had two decent opportunities to test Kepa but fired straight at the Chelsea goalkeeper both times, before Carles Alena forced him into a sprawling save.

Chelsea's attacking intent had been stunted since the break but they nearly doubled their lead in a rare break when Michy Batshuayi was played in from the left and from a close-range shot straight at Neto.