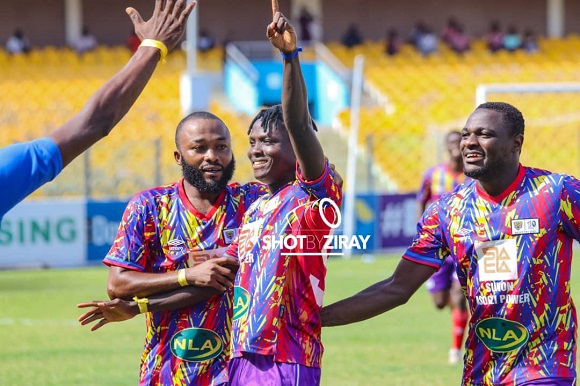 Samuel Inkoom scored his second goal of the season to power Accra Hearts of Oak to a 1-0 win against Bibiani Gold Stars in their Ghana Premier League Match Day 29 fixture at the Accra Sports Stadium.

The former Dnipro right-back who joined the club in the second round of the season converted from the spot inside 11 minutes after Benjamin Yorke was fouled in the box.

The goal gave the Phobians their third win in four matches – taking them to the third spot in the League standings with 47 points – one point behind second-placed Bechem United and nine points adrift of leaders Asante Kotoko.

The defeat adds to Bibiani Gold Stars' unimpressive run on the road having gone 15 matches without a win.

Accra Hearts of Oak have yet to lose a game since Sunday, April 10 when they lost 1-0 to arch rivals Asante Kotoko at the Baba Yara Stadium.

The win takes King Faisal to the 13th spot with 34 points whiles Eleven Wonders drops to the 16th position with 32 points.

Seidu Basit scored as Accra Lions worsened the plight of WAFA by beating them 1-0 at Sogakope Park. The lanky attacker got on the end of a descent cross to head home the only goal that separated the two sides.

The victory sends Accra Lions to 9th with 39 points as WAFA continue to wallow in the relation zone - 17th in the table.

Karela United left it late to beat Accra Great Olympics 1-0 at the CAM Park at Aiyinase. The game was destined for a goalless draw until Richard Berko broke the hearts of Great Olympics with a 90th minute goal.

Bechem United snatched a vital away point against Real Tamale United following a 2-2 draw at the Aliu Mahama stadium.

Emmanuel Owusu drew the first blood for Bechem United in the 21st minute but the lead was cancelled 10 minutes later after RTU were awarded a penalty in the 32 minute.

Roland Frimpong converted from the spot to send the home fans into wild ecstasy.

Issah Kuka increased the tally for RTU thirteen minutes after the break but ssubstitute Hafiz Wontah Konkoni cut short their celebrations after scoring in the closing stages of the game to deny Real Tamale United the three points.

Dreams FC suffered another defeat on the road as they lost 2-1 to Legon Cities at the El Wak stadium. The Still Believe lads have been off colour in recent fixtures and needed a win to use as a springboard but that did not materialize as they fell to the Royals.

Legon Cities scored two first half goals through Michel Otu and Yousssifou Atte before Dreams FC reduced the tally through Sadat Mohammed in the second half.

Berekum Chelsea and Medeama SC played out a 0-0 draw at the Golden City Park.