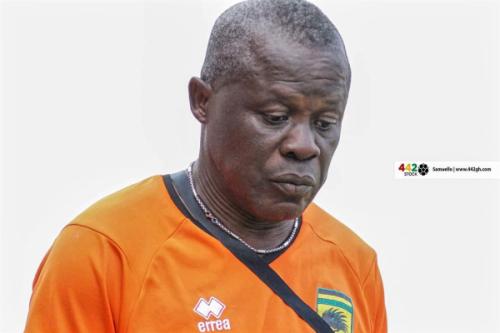 Asante Kotoko coach Johnson Smith says his outfit has put Sunday loss to Aduana Stars behind them as they are focusing on their next fixture.

The Porcupines on Sunday suffered their first home defeat of the 2020/21 season to the Dormaa based side.

Samuel Bio's second-half strike was all that Aduana Stars needed to beat Kotoko for the first time in their history since joining the Ghana Premier League in 2009.

Opening up on the club's second defeat of the season, Smith said his outfit will be ready for AshantiGold in the matchday 11 clash.

"No, I will make sure I boost their confidence level, I won't let this discourage my team, yeah we've lost, let's forget about it and focus what's ahead of us, I won't even do 'postmortem," he said.

Samuel Bio scored yet again against Asante Kotoko as Aduana Stars inflicted a 1-0 victory on the Porcupine Warriors in their matchday 10 fixture at the Accra Sports Stadium.

Bio, a former player of Tema Youth and Medeama SC for the second time running scored the match winner against Asante Kotoko in the Premier League. He netted the winner last season when the two teams met at the Nana Agyemang Badu Park during the 2019/2020 season.

The first half ended goalless with both sides failing to put the ball at the back of the net. Fabio Gama had a chance to score but his effort went off target in the 59th minute. Naby Keita’s first shot on target after coming in was saved by Joseph Addo in the 72nd minute.

Samuel Bio broke the deadlock in the 73rd minute with a sweet strike as Aduana Stars.

Aduana Stars held on to the lead to record their first away win of the season.