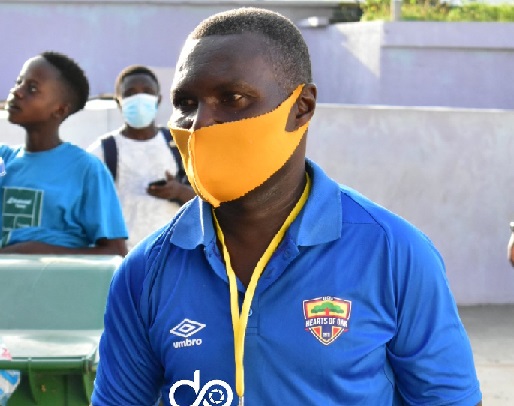 Hearts of Oak coach Edward Nii Odoom has expressed dissatisfaction with his team’s stalemate in their opening Ghana Premier League fixture against AshantiGold.

The Phobians were forced into an eventual 2-2 draw by the Miners at the Accra Sports Stadium on Tuesday night.

Addressing the media after the game, the tactician said his outfit could have won the game had they been clinical in front of goal.

"I'm very disappointed about the result, this game is not a game of draw we should have killed this game in the first half. Even in the second half, we created all the chances but I think lack of concentration disturbed us."

The Phobians started the game on the front foot, but was quickly forced into defending as the visitors took charge of the midfield play and pinned them into their half.

David Abanga tested the resolve of goalkeeper Richard Attah in the 9th minute with a flash shot which the latter struggled to parry over the cross bar.

On 18 minutes Roland Amouzou came face to face with Attah but failed to beat him, Obeng Junior showed him how it was done when he blew one past Robert Dabuo in the 32nd minute for the opener.

Hearts could have recorded a cricket score by the 40th minute mark but for some missed scoring opportunities by Daniel Afriyie Barnieh, Obeng Jnr.

The Miners went ahead and punish them for those misses with the equaliser, after an unmarked Kwofie tapped home a cross from the right to draw level.

Although considering a goal, the Rainbow boys were a shade ahead of the Aboakese lads and it was evident they were going to increase the tally, and rightfully so they did in the 80th minute when Obeng finished off a great move.

When all was coasting to a sweet victory for the Phobians, Kwofie popped up to throw the dagger at the host with yet another tap in to level up in time added on.

The draw was the 14th in as many as 59 meetings in the Ghana league between the two sides, with the Phobians winning 27 times and losing 18.