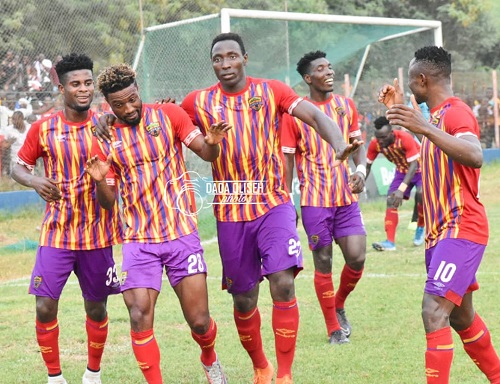 Hearts of Oak are have called back their players to training today at Pobiman despite the coronavirus outbreak.

On Sunday, the Ghana Football Association released a statement on the suspension of all its competitions with immediate effect until further notice following the directives given by the President of the Republic.

Due to this, the Phobians gave their players a week off and handed them individual training programmes to work on at home despite being on break.

"Taking into consideration the current health situation that we are in, and we don't know what's next, so the technical team in consultation with other people took the decision for the players to be out of training for a week.

However, we are monitoring the situation if after the one-week and it is still is not better then another decision will be taken again because you cannot risk human lives.

Despite them being off, the coach has assignment individual training programmes to them."

However, the club have revealed that there has been a change in their programme and the team will therefore resume training today at Pobiman.

Meanwhile, Hearts of Oak have disclosed that they will approach the Ghana Football Association for compensation after their match week 15 clash against King Faisal was called off.

Hearts of Oak were scheduled to play King Faisal on Monday in match week 15 of the Ghana Premier League but the match was called off due to Sporting activities being put on hold following government's directive.

According to the Public Relations Officer of the Phobians, Kwame Opare Addo his club will approach the GFA for compensation due to the cost incurred in the lead up of the said match.

Speaking in a radio interview he averred that if they are compensated fair enough if not lives still moves on.