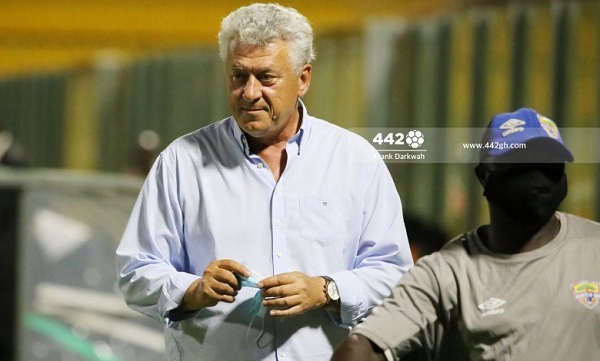 Kosta Papic has reiterated that Hearts of Oak will only spend in the upcoming transfer window if the right player becomes available.

Hearts of Oak are in the market to bolstered their squad to mount a serious challenge in the ongoing 2020/21 Ghana Premier League.

Despite other clubs signing players to supplement their squads and will be registering them when the second window registration opens on February 16, Papic stressed that Hearts of Oak will not be forced into panic buying simply for the sake of it.

"We're looking to strengthen the Hearts of Oak team in the transfer window. We'll receive the scouting reports tomorrow for the list of potential players we could buy," he told Nhyira FM.

"We need to strengthen the defense, midfield and striking zones during the transfer window but it's all about the availability of the players I want."

The Serbian trainer also insisted that said in spite of their patch form which has seen them down to 11th on the log, his team can still win the league.

He called on the supporters of the club to continue to get behind the team, as Hearts of Oak will come good.

"My target is to win the Ghana Premier League and when we find the winning formula, we're going to catch the teams ahead of us on the league table."

"I understand the fans are not happy, and I'm not happy myself but sometimes, we must be patient as much as we can and be prepare for whatever that is coming'' he concluded.

Hearts of Oak last Sunday were held to a 1-1 draw match against Legon Cities at the AccraSports Stadium. Their matchday 14 encounter against Asante Kotoko this week has been rescheduled to February 28 due to the latter's assignment in the CAF Confederation Cup this Sunday.