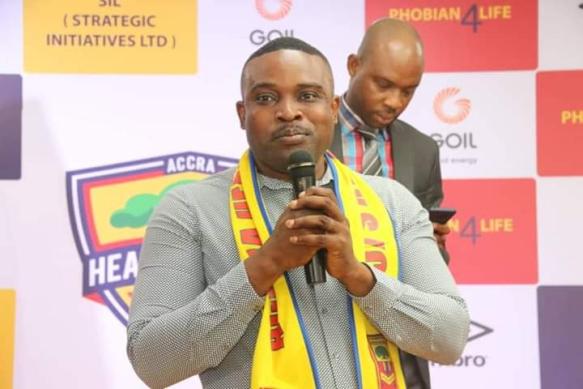 Hearts of Oak supporters chairman Elvis Herman Hesse says he will be happy should Sulley Muntari join his outfit.

Muntari has been without a club after ending his stay with Spanish lower tier side Albacete and rumors were rife on Friday afternoon that he had joined the former League champions ahead of the start of the second round of the Ghana Premier League.

It did not take long before the clubÂ issued a statement telling his supporters that the former Inter and AC Milan midfielder has not be signed by the 1911 club.

"Hearts Of Oak is the Premier club in Ghana and will continue to set the standards, we therefore urge our supporters not to rely on information unless it comes from our official handles.

Hearts Of Oak wants to notify the general sporting public that we have not signed Ghana International Sulley Muntari as it's being reported by the media. Sulley is a great player and a friend of the club. We will continue to unveil the players we have signed."

ButÂ Elvis Herman Hesse says he would be happy if Muntari joins the his outfit.

"I will be very glad to see Sulley Muntari playing for Hearts of Oak, if even itâ€™s just for a season. Itâ€™s not official though, but I have heard snippets of information to the effect that Sulley relish donning the rainbow colours. Moreover he has special affinity for us,â€ Elvis Hesse Herman told Kumasi-based Fox FM.

Also, theÂ Public Relations Officer of National Chapters Committee (NCC) of Hearts of Oak, Kobby Jones says the club will love to work with former AC Milan and Inter Milan star, Sulley Ali Muntari as heÂ will bring the needed spark missing at the club should the Accra based outfit sign him.

"Hearts of Oak have not signed Sulley Muntari but we will love to work with him," Kobby Jones told Sikka Sports.

"Having Sulley Muntari in Hearts of Oak circles will bring an aura to the club."Â