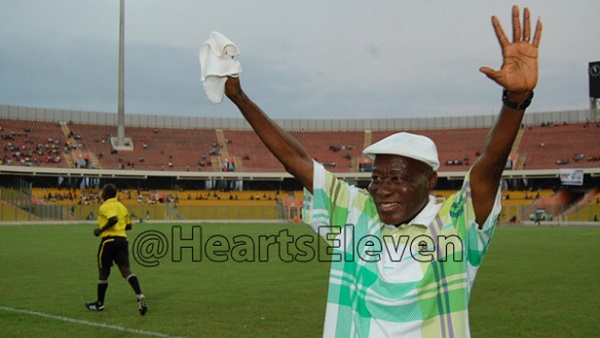 According to Sarpong, it would be a great honour to name the yet to be constructed Complex after Jones Attuquayefio for his great services to the club.

The late Attuquayefio won a host of titles with Hearts of Oak which include the Ghana Premier League, CAF Champions League and maiden CAF Confederation Cup in 2004.

“Accra Hearts of Oak must name Pobiman Training Complex after Sir Cecil Jones Attuquayefio for his Great Achievement for the Club, He played all his football for Olympics as a player but when he became a coach for the Phobians he did the unpredictable by winning every trophy”, league titles, FA cups, CAF champions league, CAF super cup and the Virgin CAF confederation cup,”  J.E Sarpong told Boss FM Sports.

Sarpong adds that he feels privileged to have had the chanced to be mentored by late Attuquayefio and believes is the greatest Ghanaian club manager in history.

“I’m very fortunate to have worked under Sir Cecil Jones Attuquayefio, the only sad thing is he could write a book for future generations but I’m trying to Honour him with a book which I have started”

“My master was and is the greatest Ghanaian club manager in history.”