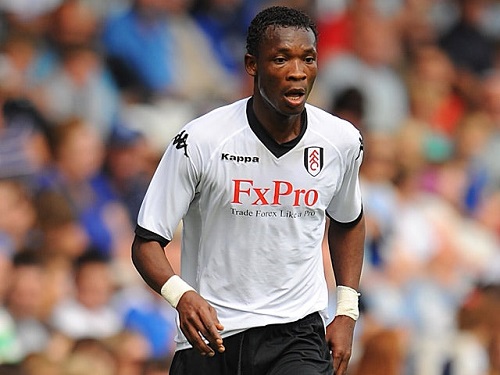 Former Ghana international John Paintsil has made a stark revelation about his time with English Premier League side Fulham.

The defender joined the Cottagers in 2008 after a two-year stay with West Ham United.

His last season at the club, though, would linger long in the minds of many after he scored a succession of own goals.

“When I joined Fulham in 2008 I was supposed to seal a four-year permanent deal with them but unfortunately for me, Roy Hodgson who brought me to the club left immediately after the 2010 World Cup," “Paintsil told Kasapa FM.

"I had to lift up my game to catch the eye and attention of the new manager Mark Hughes.

“I remember my first day at training after the World Cup, I confronted Mark Hughes about my contract and to find out whether he had plans for me.

"He told me to give him two weeks to make a decision. Many days and months passed but he was still procrastinating and this was causing me a severe despondency and dejection.

“In fact I lost my mental strength and I began to score own goals. In one those moments, I scored four own goals in a month and this is unusual of me and this even got me thinking about retiring from the game.

"I believe I retired prematurely from football because of what I experienced at Fulham under Mark Hughes."

Paintsil ultimately scored four own goals in 94 Premier League appearances, averaging an own goal in every 24 matches.

The record, at the time, put him fourth on the list of all-time own goal scorers per 24 games.

Paintsil left Fulham at the end of the famous season to join Leicester City, from where transferred to Israeli outfit Hapoel Tel Aviv.

In 2013, the former Liberty Professionals man made a return to Africa, joining South African side Santos.

A year later, he crossed carpets to Maritzburg United where he called time on his playing career.

A member of Ghana's silver-winning side at the 2001 Fifa U20 World Cup in Argentina, Paintsil helped the West African nation qualify for the senior World Cup for the first time in 2006.

He played at the final tournament in Germany and made a second appearance at the 2010 edition in South Africa.