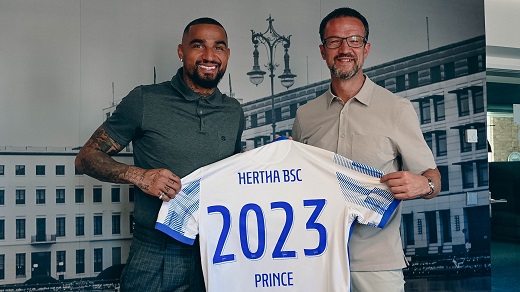 Ghana international Kevin-Prince Boateng has extended his contract with Bundesliga side Hertha Berlin for one year.

The 35-year-old – whose contract has been extended until the summer of 2023 - was part of the squad that fought and won against Hamburg in the play-offs to retain their place in Germany’s top-tier.

"I’ve always said how special and valuable this club is to me, and tried to show it both off and on the pitch. I feel good, I’m hungry and excited to keep going forward with the lads," elated Kevin-Prince Boateng said.

READ ALSO: Kevin-Prince Boateng marries on Moon in the metaverse

"It wasn't just in the relegation that we saw the importance of Prince for our team. He is our leading player, goes ahead, and pulls everyone along. Exactly these qualities are what we need in the coming season as well," Hertha Berlin’s sports managing director, Fredi Bobic, added

Boateng is a product of Hertha Berlin’s academy as he graduated at the age of seven before he was promoted to the senior team in 2005.

He featured in 53 games for the senior team before he was signed by Premier League side Tottenham Hotspur in 2007 and remained part of Spurs’ fraternity until 2009. He went to Borussia Dortmund on loan before signing for Portsmouth.

After his stay in England, Boateng joined Genoa in 2010 before a switch to AC Milan, with whom he emerged as Serie A’s champions in 2011.

The former German junior international returned to the Bundesliga and played for Schalke 04 between 2013 and 2015.

The star - who was given an indefinite suspension from the Ghana national team after the 2014 World Cup in Brazil – has further played for Spain’s Las Palmas, Eintracht Frankfurt, Sassuolo, and Barcelona – on a six-month loan and became the first Ghanaian to play for the Catalan side – before further moves to Fiorentina, Besiktas – on loan – and Monza before he returned to Hertha Berlin in 2021.