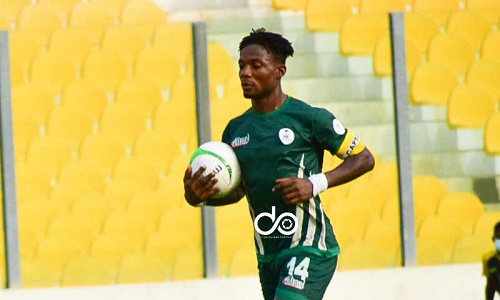 King Faisal are in talks with Hearts of Oak about the possibility of Kwame Peprah joining fellow Ghana Premier League side, Primenews understands.

Peprah has been a revelation in the ongoing Ghana Premier League scoring 9 league goals in 17 outings for King Faisal.

Due to his exploits in the ongoing league, Hearts of Oak have officially enquired about the availability of the striker.

This bankroller of King Faisal, Alhaji Grunsah has confirmed in an interview that, the Accra based club have contacted him about their marksman.

According to him, his club has communicated their terms to clubs that want Preprah to join them and if they meet their demands they striker would leave at the end of the season.

“Hearts and Dreams FC officially wrote to us requesting for negotiations to open for Kwame Peprah. But, for Kotoko, there has been nothing officials from them," Grusah told Peace FM.

"As a result, we have discussed our expectations regarding the transfer of the player. Very soon we will announce where Peprah would be playing next season,” he added.