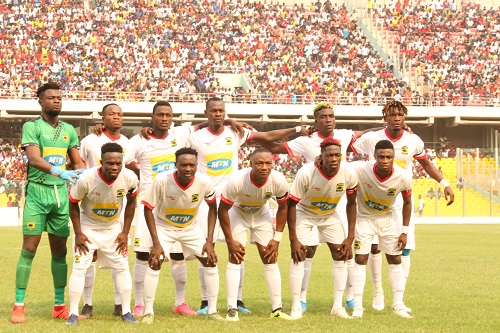 Asante Kotoko will on Friday battle Bechem United in their Ghana Premier League matchday 12 fixture at the Accra Sports Stadium.

The Porcupine Warriors who sit fifth in the Premier League table have moved their home grounds to the Accra Stadium following the closure of the Kumasi Baba Yara Stadium. Kotoko hold a 100% record in games played in Accra in the ongoing campaign.

The Reds won 3-1 against Legon Cities and defeated their arch-rivals, Accra Hearts of Oak 2-1 at the same venue. Asante Kotoko have gone three games without a win, with their only victory coming against Dreams FC in an away fixture, a week 9 fixture at the theatre of Dreams, Dawu.

Kotoko have scored only one goal in their last five games, a worrying phenomenon for Head Coach Maxwell Konadu.

They look quite convincing at the back having conceded six goals in 11 games and one candidate who has been impressive for them is defender Christopher Nettey.

The former Attram De Visser right-back has featured in all eleven games for Kotoko in the ongoing season, but will not be available for this weekendâ€™s game due to accumulated yellow cards.

With the worrying trend at the Club, the experience and individual brilliance of Justice Blay, Emmanuel Gyamfi and Maxwell Baako could be the solution to their plight. Kotoko have scored 10 and conceded six. While Bechem United have leaked 11 goals in 11 games.

This clearly confirms the weakness in the defence of the Bechem lads. But they take solace in their free-scoring teenager Prince Adu Kwabena who has bagged 7 goals this season.

Adu Kwabenaâ€™s partnership with Yaw Annorl and Hafiz Konkoni is deadly and the trio are expected to give the Kotoko backline headache on Friday night.

They recently triumphed 2-1 over Liberty professionals in Bechem and come into this game brimming with confidence as they sit right behind Kotoko with one point adrift.

After serving a three-match ban, Kotoko seems to be in a mini-crisis after back to back defeats. They were beaten by Aduana Stars in the league before being dumped out of the MTN FA Cup by second-tier side Asokwa Deportivo.

Bechem United will be heading into this game with much confidence as against a Kotoko side who are wallowing in dismay and this crunch encounter home away from home looks like a redemption mission for the Kotoko in their quest to return to winning ways.