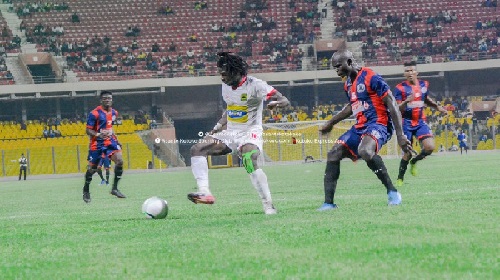 The Ghana Premier League game between Asante Kotoko and Bechem United is scheduled to be played on Friday night, under floodlights.

The Porcupines will be locking horns with the Bechem based club at the Accra Sports in matchweek 12 of the Ghana Premier League on Friday, February 28 at 7: 00 pm.

The Reds are hosting Becehm United at the Accra Sports due to the shutdown of the Baba Yara Sports Stadium.

A statement from the clubs app read: A 'Fabulous' football night await our fans on Friday as we host Bechem United at the Accra Sports Stadium at 7 pm.

The Premier League matchday 12 clash is the first of a streak of games to be played at the grounds which we have adopted as our home following the closure of the Baba Yara Stadium.

Significantly, the fixture would be the first time in four home games that we would grant entry to our fans having finish serving our three-home-game supporters' ban.

The Baba Yara Stadium has been closed down for renovations as the country prepares to hosts this year's Independence Day celebration at the venue.

Asante Kotoko are seeking to bounce back following their recent defeat to Aduana Stars at the Nana Agyemang Badu Park. They lie 5th with 18 points, 3 points adrift of leaders AshantiGold.