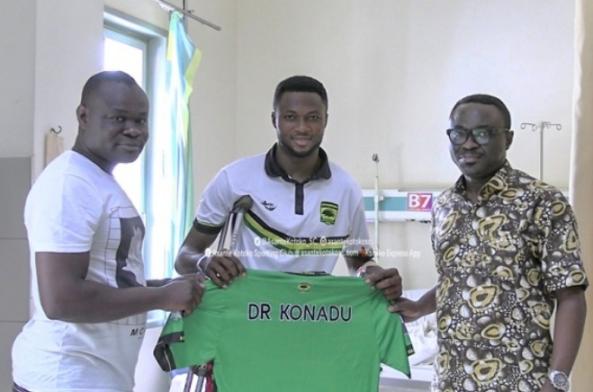 The goalkeeper suffered an anterior cruciate ligament tear four years ago while playing for Premier League side, Inter Allies.

A surgery was done on him, but poor management of the rehabilitation process caused it to reoccur shortly after joining the Porcupines in 2018.

The goalkeeper's knee was carved inwards and wobbling when he was presented to doctors last Monday, and he went under the knife on Wednesday and came out successfully. 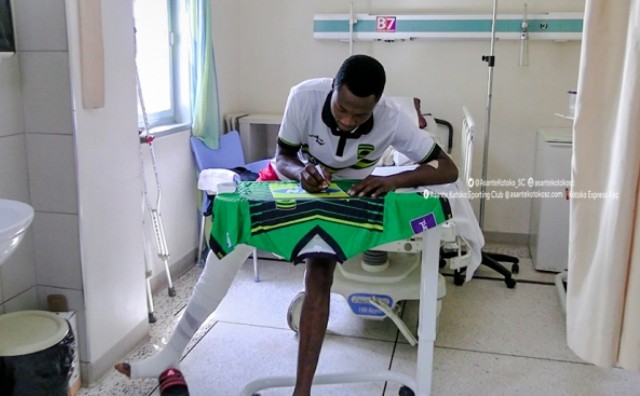 Head of the Trauma and Orthopaedic Department at KATH, Dr. Konadu Yeboah performed the surgery which lasted five hours and thirty minutes.

Osei Kwame was discharged on Saturday and will continue his rehabilitation under the care of the club's medical team and Dr. Konadu.

The player did not leave the hospital without showing appreciation to Dr. Konadu as he signed a jersey for him and also thanked him for saving his career.

Osei Kwame is expected to be sidelined for six months after which another surgery would be done to remove the implants from his knee to usher in his full recovery.

"What we did was to perform a correctional surgery on the knee to stabilise it and return it to its original shape. We also reconstructed the Anterior Cruciate Ligament that has been torn for four years," Dr. Konadu told Kotoko Express App before discharging the player.

"We are now waiting for the reconstruction to heal solidly enough for him to return to the field. This is going to take six months. While waiting, he has been taught to move the joints so that by the time it is fully healed, the joints will not be stiff."

"I want to say a big thank you to Dr. Konadu for saving my career, " Osei Kwame said before he left the hospital to be driven home by Medical Team member, Emmanuel Osei Owusu. "All hope was lost when I came here, but I am now very happy that he has brought back life into my knee and also given me a renewed assurance that I will be back on the field."

"I also thank the club's insurance provider, Hollard Insurance Company Limited for paying for the cost of the surgery. I am very grateful to the club, my teammates and the supporters for their prayers and support."