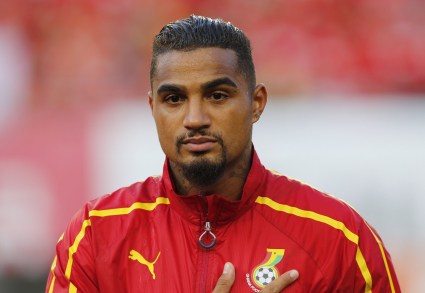 Kevin-Prince Boateng has pledged to support families of the Offinso accident victims.

Eight players died after a bus 36 juvenile players were travelling in plunged into the Offinso river.

The tragic news sent shock waves across the footballing world with condolences being sent from all walks of life including FIFA President Gianni Infantino.

Upon hearing the news, Boateng who recently signed for Monza has made it is known that, the families of the 8 victims who lost their lives can count on him for support.

“I heard about it and it really made me sad,” he said.

“I first saw it on Social Media and I called a friend to find out if it was true. He told me about it and I felt really really sad because I have kids of my own, one is 12 and one is 6 so it’s a big tragedy and it hits me hard,” he added.

“Like I said I head it on the news and that is why I am here, I want to help.”

“Anything that is necessary, I want to help. I want to get in touch with the families. I want to give them the necessary support to feel free. I know it’s hard, and I know how hard it is for parents to bury their children,”  the former AC Milan attacker concluded.

Meanwhile, government of Ghana has also assured the families of the accident victims of some. The Director-General of National Sports Authority, Professor Peter Twumasi announced this when he led government delegation on behalf of the Minister of Youth and Sports Isaac Asiamah, to Offinso in the Ashanti Region to visit families of juvenile footballers who were involved in the recent car crash.