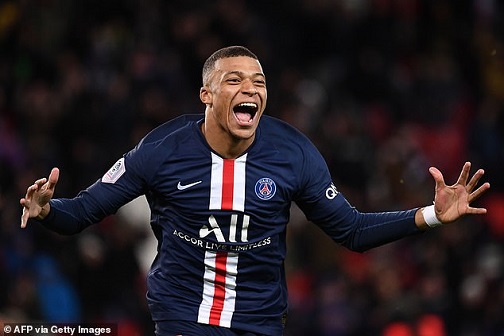 Kylian MbappeÂ has been named in a preliminaryÂ FranceÂ squad for this summer's Tokyo Olympic Games.

TheÂ Paris Saint-GermainÂ forward is able to be included in the squad as part of their Under-23 player quota.Â

Mbappe is one of 80 players provisionally selected before that number gets cut significantly in the build-up to the tournament.

The list will eventually be cut to 50 players before a final squad of 22, comprised of 18 Under-23 and four overage players - is picked in the weeks leading up to the tournament.Â

It remains to be seen if Mbappe is chosen though, given his participation for France in Euro 2020 - the final takes place on July 12. The Olympics, which starts 12 days later, does not finish until August 8, leaving him with very little time to recover before club football starts again.

'Like all young people of his age who have talent, he is therefore on the list.'Â

When asked how club chiefs may react to their star players being picked for Olympic duty, he added: 'Club presidents, in general, find that the dates [of the Olympic tournament] are not good.

'I saw Nasser (PSG president Al-Khelaifi). I asked him how was Mbappe. He said to me, "very good".'

Mbappe has scored 27 goals and contributed 17 assists in 31 appearances across all competitions for PSG this season.

Tokyo 2020 will be the first time France have competed in an Olympic football tournament since Atlanta 1996.

They won Olympic gold in football once, beating Brazil 2-0 in the final of the Los Angeles 1984 Games.Â

Brazil are the current reigning Olympic champions after they prevailed on home soil at the Rio 2016 tournament.Â