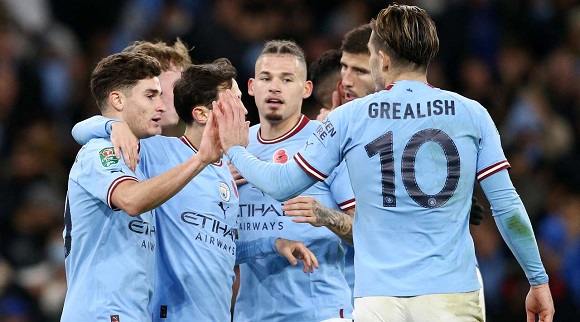 Riyad Mahrez and Julian Alvarez were both on target as Manchester City beat Chelsea 2-0 to book a place in round four of the League Cup.

Both sides played with attacking intent in a lively, but goalless, first half with Alvarez and Jack Grealish going close for the hosts, while Christian Pulisic and debutant Lewis Hall almost netted for Chelsea.

Pep Guardiola’s men upped the ante following the interval and a two-goal blast in five minutes secured the victory.

First Mahrez curved a fine free-kick through a poor Chelsea wall before the Algerian’s saved shot was tucked home by Alvarez.

Next up, Man City host Brentford in the Premier League on Saturday. Chelsea visit Newcastle.