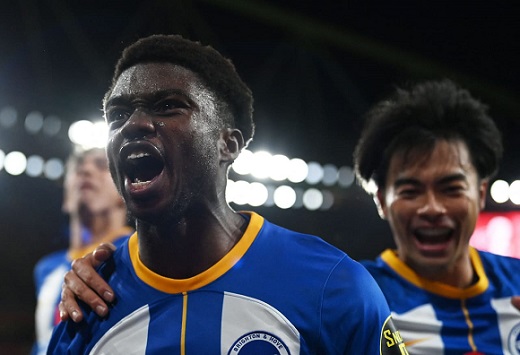 Brighton & Hove Albion came from behind to dump Arsenal out of the Carabao Cup at the third-round stage, inflicting a first home defeat of the season on Mikel Arteta’s side in the process.

Arsenal took the lead slightly against the run of play following a rapid counterattack led by Reiss Nelson, who charged through the middle before playing in Eddie Nketiah, whose right-footed curling shot nestled in the top corner.

Arteta made a raft of changes for the game, including handing Karl Hein a debut, but it was baptism of fire for the 20-year-old as he took out Danny Welbeck, conceding a penalty and was perhaps fortunate not to see red. Welbeck sent the young Estonian the wrong way but refused to celebrate against his former club, as the first half ended 1-1.

The Gunners made a bright start to the second period and came within a whisker of taking the lead, Nketiah’s first-time shot crashing off the inside of the woodwork before bouncing to safety.

But it was Brighton who scored the game’s all-important third goal, with Kaoru Mitoma finishing an intricate attacking move off just shy of the hour-mark.

Roberto De Zerbi’s charges would only grow in confidence from here and they put the game out of Arsenal’s sight when Tariq Lamptey burst through and stuck the ball between the legs of Hein.