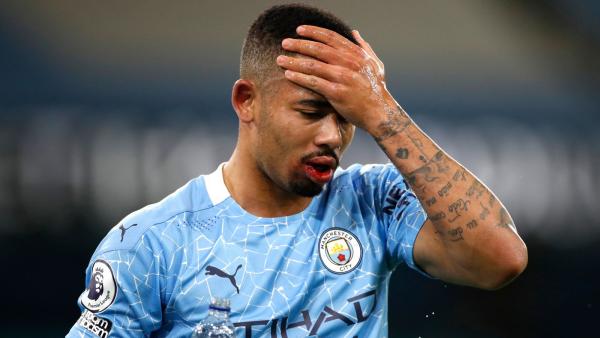 Manchester City duo Kyle Walker and Gabriel Jesus have tested positive for the coronavirus, the club confirmed on Friday.

Two members of the club's staff, whose identities have not been revealed, have also tested positive.

Defender Walker and striker Jesus now look set to miss City's Premier League matches against Newcastle, Everton and Chelsea, with a return possible for their Carabao Cup semi-final against Manchester United on January 6.

"All four personnel will now observe a period of self-isolation in accordance with Premier League and UK Government protocol on quarantine," City said in a statement released on Friday morning.

"Everyone at the club wishes our colleagues a speedy recovery over the Christmas period ahead of their return to work, training and competition."

The duo's absence comes as a major blow for City during the congested festive period. Pep Guardiola's side host Newcastle on Boxing Day, before travelling to face Everton at Goodison Park just 48 hours later.

City then have a six-day gap before their trip to Stamford Bridge to face Chelsea, but are still set to be without the duo, who are obliged to self-isolate for 10 days from the date of their positive test.

Walker and Jesus both featured, the latter scoring, as City booked their place in the Carabao Cup semi-finals by winning 4-1 at Arsenal on Wednesday, and they are set to clear quarantine in time to be available to face Manchester United at Old Trafford.