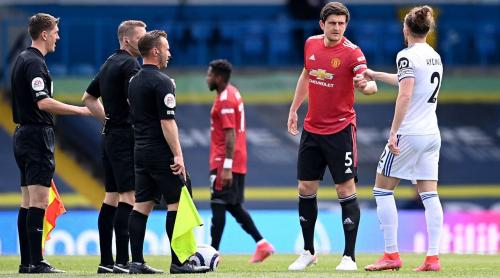 The pre-match focus once again centred upon the fall-out from the collapse of plans for a European Super League with a banner protesting against the Red Devilsâ€™ owners, the Glazers flown overhead.
There was little drama on the pitch in the first 45, however, with Illan Meslierâ€™s smart save from Marcus Rashfordâ€™s free kick the best of the action.

Both sides had half chances to take control in the second period but in truth there was never any likelihood of a repeat of the 6-2 epic between the sides when they met at Old Trafford back in December.
The second-placed visitorsâ€™ failure to claim a sixth straight victory in all competitions means rivals Man City need just two wins from their last five matches to claim the title. Leeds edge up to ninth place and are now six Premier League games unbeaten for the first time since 2002.

The Red Devils will now turn their focus to the first leg of their Europa League semi final at home to Roma on Thursday. Leeds are back in action when they visit Brighton in the league next Saturday.

In the other game, Burnley beat Wolves 4-0.