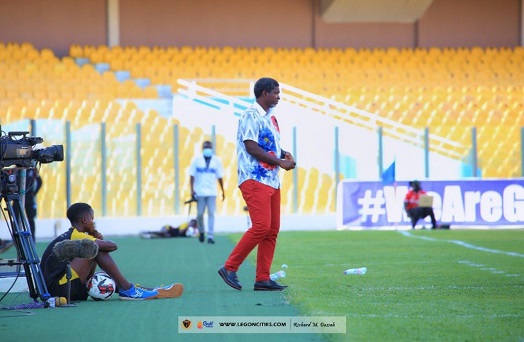 Legon Cities coach Maxwell Koandu has opened up on how he managed to beat his former side Asante Kotoko on Sunday.

The Royals made light work of the Porcupine Warriors 3-1 at the Baba Yara Sports Stadium courtesy of a brace from Hans Kwofie and a penalty with Mudasiru Salifu getting the consolation for Kotoko.

Maxwell Konadu after explained how they easily picked apart Kotoko. Speaking to StarTimes, the gaffer said knowing how key Fabio Gama is to Kotoko's play they deployed a strategy to reduce his influence.

"I think both teams did well with all due respect to my beloved club Kotoko it is a team I know too much," he said.

... we did a lot to soak the pressure from the attackers. We knew Fabio Gama was going to play and knew how he plays,  when we saw the line up it was more or less like a 4-2-3-1 formation.

So we tried to put pressure on him (Gama) to play his passes squarely or back. That helped us a lot as he couldn't penetrate our defence."

According to him, despite his team leading at half time they allowed Kotoko too much space in between the lines, so he tighten the loopholes in the team after recess.

Legon Cities next will host Elmina Sharks next week at the Accra Sports Stadium in matchweek 27 of the Ghana Premier League while Kotoko travel away to Sogakope to play WAFA.