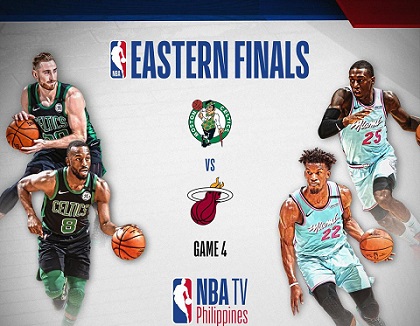 Whoever wins game 4 in the Heat and Celtics series will make it to the finals. Celtics would be 2-0 with Hayward and all momentum.

Ahead of the Boston Celtics’ pivotal Game 4 against the Miami Heat in the Eastern Conference Finals, mostly Game 7s are known as Win It or Go Home but this phrase has come earlier for Celtics who’ll stand a difficult chance to make it to the Playoffs Finals if they lose tonight’s Game at 8:30 p.m. ET from Disney’s Wide World of Sports Complex.

The Celtics currently trail the surging Heat 2-1 in the series, and the last thing that they want to do is come within just one game of being eliminated from title contention.

After going down 2-0, the Celtics managed to get one back against the Heat to make the battle even more interesting. With that said, another win in Game 4 to even series would surely swing things in Boston’s direction.

Miami held a team film session Monday morning, and Crowder said there was more film study on the schedule for Monday night.

“Obviously, I don’t want to give everything away,” Crowder said. “But, obviously, we’ve got to make adjustments, and that’s what we’ve been doing. We’ve been practicing, watching film. We’ll continue to do so. But obviously it’ll be a different game plan, different approach moving forward.”

The Celtics outscored the Heat 60-36 in the paint in Game 3.
The Heat has allowed 113.3 points per 100 possessions in the East finals.
Boston is shooting an efficient 47.3 percent from the field in the East finals

“It doesn’t take a rocket scientist to figure out that that ain’t going to work,” coach Erik Spoelstra said of the Heat’s Game 3 defense. “It’s competition. They had something to say about that, and they came out with great force off the dribble. They were driving and attacking in a lot of different situations, and we did not handle that well.”

Both Miami and Boston have impressed in a big way en route to an appearance in the Eastern Conference Finals, so it’s no surprise why their matchup has been so highly anticipated.

Tips:
◦ A lot of work still rest on the shoulders of Jimmy Butler who has been fulcrum for the MiamiHEAT team with his exploits and dominance in 4Qs
◦ Will health issues free Andre Iguodala to contribute his part to this boisterous Heat team with his leadership and playoffs instincts from Golden State Warriors days?
◦ Gordon Hayward is back!!! The five-man combination of Kemba Walker, Marcus Smart, Jayson Tatum, Hayward and Jaylen Brown did not disappoint. His presence now will be like the icing on the cake.
◦ Smart and Brown are good buddies now after angrily exchanging words in their locker room after Game 2