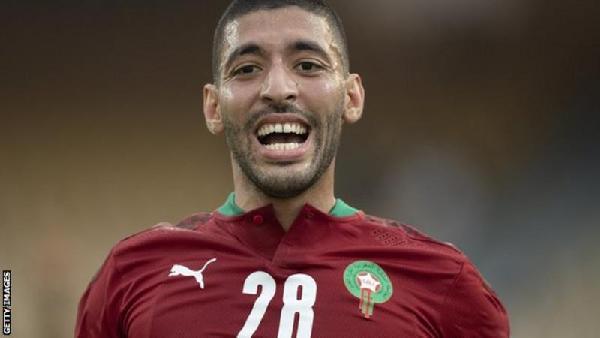 Morocco scored a crucial away goal in the 75th minute against DR Congo to earn a 1-1 draw in Kinshasa in the first leg of their 2022 World Cup playoff tie.

Brentford's Yoane Wissa gave the hosts the lead in the 11th minute following a deflection off the head of Morocco captain Romain Saiss.

In the second half, the Atlas Lions' Ryan Mmaee - who has a Moroccan mother and Cameroonian father - then put the ball over the bar from the penalty, before Tarik Tissoudali spared his blushes with a late equaliser.

DR Congo finished the game with 10 men after Glody Ngonda was dismissed for a second yellow card.

The Leopards had taken the lead somewhat against the run of play through Wissa, who cut inside on the left and took a shot from the edge of the area that saw the ball brush Saiss' head and past Yassine Bounou in the goal.

Three minutes after the break Wissa came close to extending the lead for DR Congo as he drove into the area before curling a shot just wide of the post.

Morocco had the chance to equalise in the 53rd minute when they awarded a penalty after the ball struck the outstretched arm of Cedric Bakumbu as it came off the head of a Moroccan.

However Ryan Mmae blazed the ball over the bar following his stuttering run-up.

A last-ditch lunge by Ryan's brother Samy Mmae saw Dieumerci Mbokani thwarted at the other end as he looked set to put the ball into an empty net at the far post after he connected with a cross from Chadrac Akolo.

Saiss made amends in the 75th minute when his sliding tackle denied Cedric Bakambu as was through one-on-one with Bounou. The Morocco captain then setting up the counter attack that led to the equaliser.

The ball was launched forward towards Ayoub El Kaabi, who nodded it down into the path of his fellow substitute Tissoudali to crash into the net.

Just four minutes later Bakambu had another chance to sore but his header was well saved by Bounou.

The hosts had to play the last five minutes of the game with then men as Ngonda was dismissed for a second yellow card of the game, who will now be suspended for Tuesday's second leg in Casablanca.

The second leg will be played on 29 March with Morocco aiming for a second consecutive World Cup and sixth overall.

Morocco score in the 75th minute to earn a 1-1 draw away in DR Congo in the first leg of their 2022 World Cup play-off tie.

The DR Congo have not qualified since 1974, when the country was known as Zaire, as they became the first sub-Saharan nation to qualify for a World Cup.