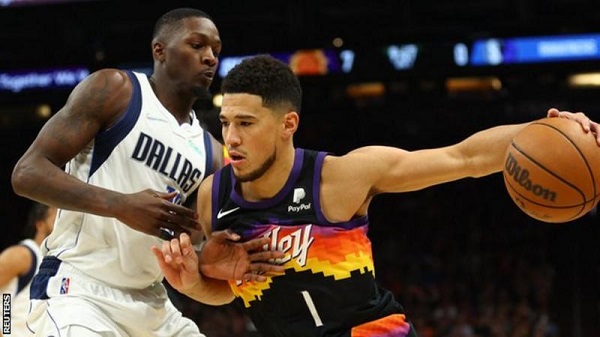 The Phoenix Suns and the Miami Heat lead their best-of-seven playoff series 2-0 after respective victories over the Dallas Mavericks and the Philadelphia 76ers.

Chris Paul scored 28 points for the Suns in a 129-109 win over the Mavericks in the Western Conference.

"We just did what we were supposed to. We won two games at home," said Paul.

In the Eastern Conference, the Heat also took advantage of being at home in a 119-103 victory over the 76ers.

Bam Adebayo scored 23 points and Jimmy Butler 22 for the hosts, while Tyrese Maxey scored a game-high 34 points for Philadelphia.

The 76ers will hope Joel Embiid will be back for the first of their two home games, on Friday, but coach Doc Rivers conceded: "He's got so many steps to go through. I don't think he's cleared any of them right now. So we just have to wait and see."

The Mavericks, who also host the next two games in their series, outscored the Suns 32-26 in the second quarter to take a 60-58 lead, with Luka Doncic top scoring with 35 points.

However, Paul scored 14 of his points in the fourth quarter as his side won it 40-26 to surge to victory.

"(We) just had to be a little bit more aggressive," Paul said.

"That second quarter we started turning it over. They got it going. Shooters were making shots and we just wanted to stay the course."