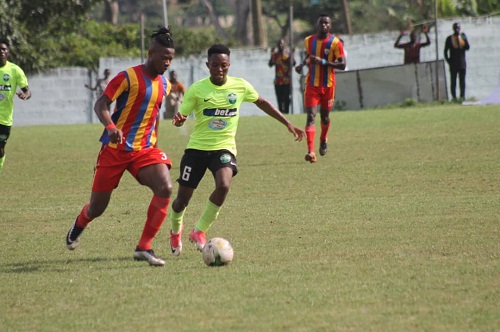 The Phobians who fielded a second string team after confirming their position at the top of the table last week in their 3-1 victory over Elmina Sharks, had little to offer against the home side.

The game began in a slow pace but it was the away side who were controlling affairs in the first 20 minutes and could have gone ahead but a Kwadwo Obeng weaving pass was too quick for Anthony Quayson, leaving Dreams goalkeeper Isaac Amoako to collect.

Two minutes later, the Phobians were forced into an early substitution after Quayson picked up an injury and was replaced by Sellassie Bakai.

The changes seemed to have distracted the flow of the Phobians, and Issah Ibrahim took advantage of that to fire from the box and send Dreams FC into the lead with 8 minutes left to the break.

Hearts were pushing for an equalizer in the second half, bringing in Joseph Esso and Michelle Sarpong but it was a strike from Malik Akowuah that troubled Isaac Amoako.

Dreams FC made their first change of the game with ten minutes left afater Richard Addai was replaced by Sass Abubakari.

Isaac Amoako was tested again after a ferocious strike from Daniel Kodie was parried by the experienced shot-stopped.

Former Phobian, Eric Gawu was brought on in what could be his last game for Dreams FC but his arrival did nnot change a lot in the game as the still believe lads ended the competition with a hard fought win.