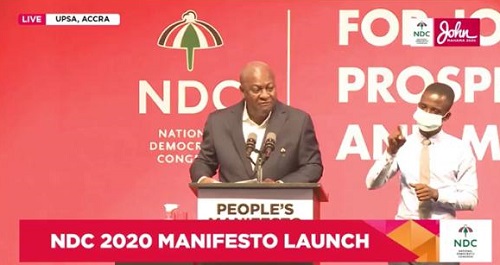 The National Democratic Party (NDC) has launched their 2020 manifesto ahead of the upcoming December polls.

NDC's People's manifesto has been put together under six thematic areas. In the Sports sector, John Mahama put out a couple of frameworks one of which said we will develop specific Sports Centres of Excellence in the three geographical zones in Ghana

During the launch of the manifesto on Monday, September 7 at the University of Professional Studies in Accra, the former President said when given the nod in December his regime will invest more in the least financed sports (Hockey, Tennis, Rugby among others.)

He also added that industries that are promoting sports in the country will enjoy incentives.

"For companies that invest in sports we will facilitate tax exemption/relief regimes to motivate private sponsorship and promotion of sports in the country. We will promote and provide funding and invest in the development of the lesser-known and indigenous sports."

In view of this, John Mahama has vowed that his regime will ensure the hosting of a colourful event when the rest of Africa troops to the country when given the nod.

"We will ensure the successful hosting and organisation of the 13th African Games to be hosted in September 2023."

The Ghana 2023 Games will involve 20 plus sporting disciplines, 50 plus participating nations and 7,000 plus athletes/technical persons and 2 co-host cities - Accra & Kumasi.