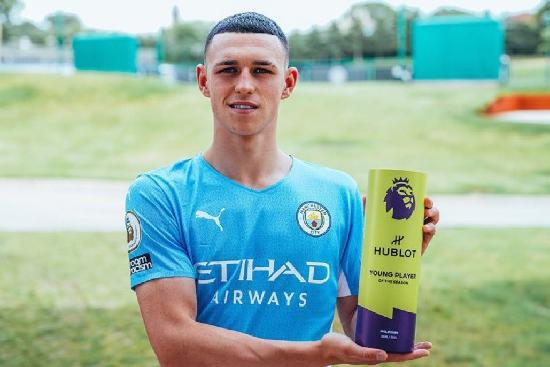 The 21-year-old retains the award having won the same prize last season, becoming the first player to do in back-to-back campaigns.

Foden has made 27 appearances for City in the Premier League this season as Pep Guardiola's side look to retain the title heading into the final day of the campaign.

The versatile attacker who came through the club's academy, has been deployed as an attacking midfielder and as part of the Citizens' attack scoring nine times.

Foden wins the award for the player aged under 23 at the start of the campaign, beating off competition from Trent Alexander-Arnold (Liverpool), Conor Gallagher (Crystal Palace on loan from Chelsea), Tyrick Mitchell (Crystal Palace), Mason Mount (Chelsea), Aaron Ramsdale (Arsenal), Declan Rice (West Ham) and Bukayo Saka (Arsenal) who were also on the shortlist.

“I am very proud to have won this award for a second season in a row,” he said.

“There are so many talented young players in the Premier League this season and it is a real honour to win it again.

“I have been really happy with my performances this season and it has been great to contribute to this team in what will hopefully be another successful year for us all.

“To be nominated alongside so many great players is an honour as they have all had great seasons for their clubs.

“I would like to thank everyone who has contributed to my development this season.”