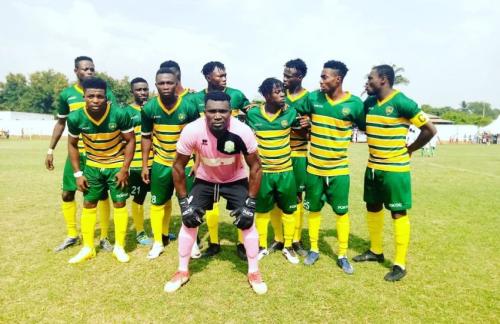 Ebusua Dwarfs were the first team to draw with Great Olympics at the Accra sports stadium during the first round of the Premier League season.

Charles Danso Otu gave Great Olympics the lead in the 12th but that goal was cancelled by Obed Bentum two minutes later on Christmas Eve - December 24, 2020.

Fresh from their 2-1 loss to Berekum Chelsea on Sunday, Ebusua Dwarfs have a date against second placed Great Olympics on match day 21 of the Ghana Premier League at the Cape Coast stadium on Saturday.

Enock Afram drew the first blood in the first half â€“ but Stephen Badu restored parity before Kofi Owusuâ€™s winner in the second half to give Chelsea victory.

Early on, a technically proficient Great Olympics were held 0-0 by Asante Kotoko in Accra on Friday â€“ a result that kept the two teams at the top of the League table with only one point separating them.

READ ALSO:Â Clubs given green light to admit fans into stadia this weekend

Ebusua Dwarfs home form has been less exhilarating this season â€“ but are still strong at home despite losing three in their first 10 home matches.

The 1965/66 Ghana Premier League champions suffered defeats to Elmina Sharks, Medeama SC and Karela United at the Cape Coast stadium â€“ a situation they want to depart from in the second round of the League.

Dwarfs sit in the bottom half of the table with 24 points after 20 Premier League matches are aiming for a win to avoid dropping further down the table.

Gladson Awako remains one of the best players in the season and will head to Cape Coast with one thing on his mind â€“ a win to keep their title aspirations on course.

Samuel Ashie Quaye will be expected to continue from where he left off after dazzling against Asante Kotoko. Quaye has been an unsung hero in the Great Olympics with his silky style of play and his fearless attitude on the field play.

Maxwell Abbey Quaye is another player with similar quality â€“ he loves to take the game to the opponent. Defender Jamal Deen Haruna is still out injured and will miss the tie against Ebusua Dwarfs.