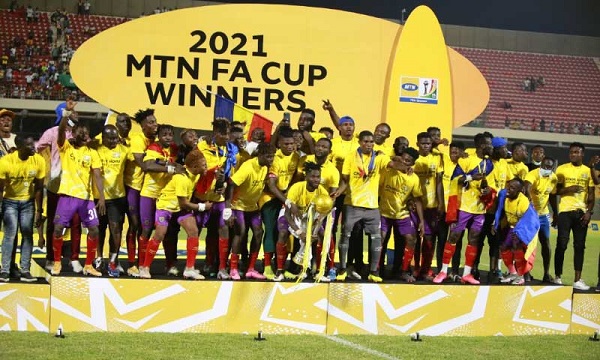 The Phobians are in the final of this season's MTN FA Cup where they would come up against 2015/2016 champions Bechem United.

Hearts of Oak who are seeking to retain the title won in 2020/21 season against Ashantigold will need to play above themselves to beat Becehm United to the trophy come June 26 at the Baba Yara Sports Stadium.

Samuel Boadu in a post has charged his team not to lose focus as there is a trophy to be won.

He is optimistic of leading the club to the ultimate next month.

"Another final, another trophy for the Phobia family, let’s finish haaaaaard guys . Special tnx to our Chairman, MGT & to my people ( The Fans). Let’s keep our eyes on the Ultimate together we shall lift the Trophy🏆 again @HeartsOfOakGH 🔥❤️🌈🌈🌈"

Another final , another trophy for the Phobia family , let’s finish haaaaaard guys . Special tnx to our Chairman , MGT & to my people ( The Fans ) . Let’s keep our eyes on the Ultimate together we shall lift the Trophy🏆 again @HeartsOfOakGH @fansofhearts Phoobia 🔥❤️🌈🌈🌈 pic.twitter.com/yLY5Ge1hxz

Hearts of Oak won the MTN FA Cup for a record eleventh time after edging out Ashantigold 8-7 during penalty shootouts last season.

After 120 minutes failed to separate the Phobians and Ashantigold, the two clubs went to a penalty shootout to decide the MTN FA Cup final game.

In a dramatic end to the shootouts, Goalkeeper Kofi Mensah’s kick went over the bar after Hearts of Oak’s Attah drove in to put his side ahead.

In an exciting end to the cup competition, Hearts of Oak dominated the first half but failed to find the back of the net.

The Miners however came into the game strongly in the second half and came close to grabbing the opener after missing some glaring scoring opportunities.

The game entered into the extra time after full time and it was Hearts who could have shot into the lead after Raddy Ovouka’s free kick was repelled by the Ashgold defense.

Both sides fought hard for a win during extra time but the game failed to produce any goals.