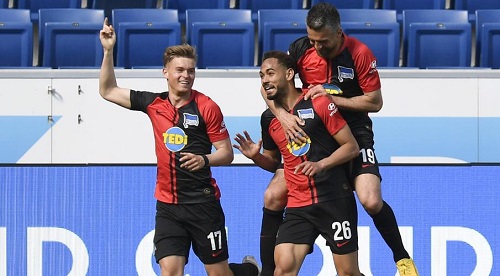 Talking points from the Bundesliga's return at the weekend:

The Bundesliga return on Saturday was the best news clubs have had for weeks but with no fans in the stadiums due to coronavirus restrictions the atmosphere took some getting used to.

"It is very strange," Dortmund coach Lucien Favre said after their 4-0 home win over Schalke 04. "You have no noise, you take a shot on the goal, you play a great pass, you score a goal and, nothing. Nothing happens."

"It is a bit surreal when two hours before kickoff you get messages from across the world that they are sitting in front of TVs ready to watch the game and then you drive through your own city and there is nothing happening," he said.

For Bayern Munich's Thomas Mueller the atmosphere in the league leaders' 2-0 win at Union Berlin on Sunday reminded him of "old men's games played in the afternoon."

"Football lives off fans and the people we can excite," he said. "So it felt a bit like a friendly game. The warm-up before the game felt like a training session. But on the pitch we communicated more because we can hear each other better."

Teams were ordered to avoid group celebrations as part of the health and safety regulations for the restart and all but one stuck to the rules.

Hertha Berlin players were unable to contain themselves and celebrated in the usual fashion during their 3-0 win at Hoffenheim.

"I am sorry but we are passionate footballers, not robots," said their Bosnia forward Vedad Ibisevic, who scored once.

"I asked our doctor before the game if the goal would still count if we did that. That was for me the most important thing," he said.

Overall Bundesliga clubs were on their best behaviour on the pitch with even-tempered dispositions.

Police had ordered fans to stay away from the stadiums as part of the regulations for the league's restart. There were no fan protests or attempts to get near grounds, a major victory for the league in its effort to finish the season by June 30.

Only a few dozen people gathered near Union Berlin's stadium ahead of their game against Bayern on Sunday but they quickly dispersed after talks with police.

Every major league around the world is closely watching the development of the Bundesliga restart, and a hitch-free resumption will no doubt be a major argument for their own competitions to resume.

Dortmund defender Dan-Axel Zagadou will not play again this term due to injury. He suffered knee ligament damage in training in April and was expected to be fit for the run-in but remained sidelined for the win over Schalke 04 on Saturday.

"He will not play any more this season," coach Favre said.