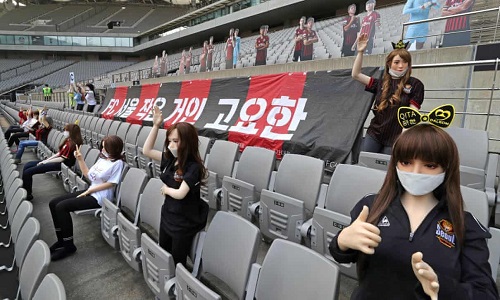 A professional football team in South Korea has apologised after “mannequins” it used as substitute fans during a match at the weekend turned out to be sex dolls.

The K-League club FC Seoul said the dolls, which had been dotted around stands currently off-limits to supporters due to the coronavirus outbreak, had been ordered inadvertently after a “misunderstanding” with the supplier.

Earlier this month the K-League became the first major football league to hold matches since the start of the pandemic, with the season’s opening game watched by a worldwide audience of fans starved of live football.

READ ALSO: Bundesliga to use five substitutes for remainder of 2019/20 season

But FC Seoul’s attempt to bring a touch of realism to Sunday’s match against Gwangju FC backfired after social media users noticed that the mannequins looked more like sex dolls.

2016 K League winners FC Seoul inadvertently used sex dolls rather than fashion mannequins to help fill empty stands this weekend. The club has apologised. Both the club and the supplier are pointing fingers at others. (It's not just COVID-19 you need to avoid catching!) #kleague pic.twitter.com/59rSU8XxYL

Some pointed out that several were holding posters carrying the name of the popular live streamer BJ Chaero – reportedly the physical inspiration for the dolls’ design – according to the Koreaboo website.

The club said it had been the victim of a mix-up, insisting it had checked with the supplier and received assurances that the dolls were not intended for sexual use.

READ ALSO: Serie A hopes to return on June 13

Photographs taken at the largely empty stadium showed about 10 dolls spaced out among seats in front of life-size cardboard cutouts of the team’s players.

“We would like to apologise to the fans,” FC Seoul said in a statement on Instagram. “We are deeply sorry.”

It added: “Our intention was to do something light-hearted in these difficult times. We will think hard about what we need to do to ensure that something like this never happens again.”

Several social media users weren’t convinced by the explanation. “There must have been a countless number of people involved in getting that approved, shipped, dressed, and seated,” Koreaboo quoted one as saying. “In that process, no one thought to question the visuals of these mannequins?”

The Sports Seoul website said that with so many football fans overseas now following K-League matches, “There are concerns this will bring international disgrace.”