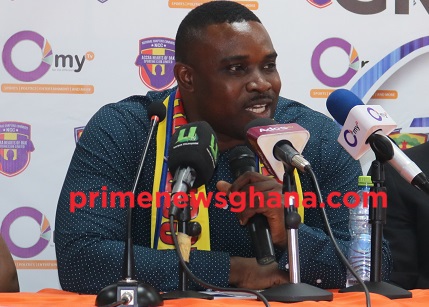 National Chapters Committee chairman of Hearts of Oak Elvis Heman Hesse is not happy about the recent performance of his outfit.

This comes on the back of Sunday's clash against Wa All Stars in which the Phobian were held to a scoring draw at the Accra Stadium.

According to the NCC chairman, his outfit needs to work hard if they have any hope of mounting a title challenge in the upcoming season as Sunday's game was nothing to write home about.

Hearts of Oak have not won a major trophy since last winning the Ghana Premier League in 2009.

''We need to work really hard because this is not Hearts of Oak. I sat in my chair after yesterday’s game asking myself how we can help the team" - Elvis Heman Hesse told Happy FM.

Wa All Stars with its manager John Painstil frustrated Hearts Oak at the Accra Sports Stadium as they held them to a 1-1 draw game in a preseason friendly.

Wa All Stars provided the Rainbow club with a major scare as they drew first blood on the stroke of halftime when Gerald Arkson curled in an effort from the edge of the box.

Hearts of Oak found the equalizer 13 minutes from full-time courtesy Kwadwo Obeng Jr who found the net with a fine header.

Goalkeeper Fatawu Dauda stood tall in the dye members of the game as he denied Kim Grant charges the late winner.

Managers of both clubs could take positives from the match as they continue preparing their respective teams for the upcoming 2019/2020 Ghana Premier League Season.