UCL: Juventus knocked out by Porto, Dortmund progress after draw with Sevilla 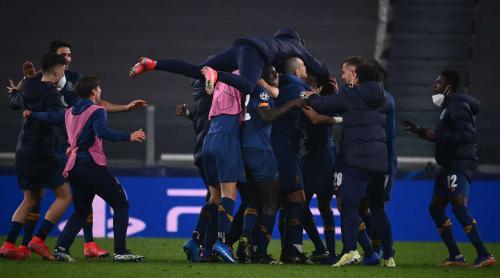 Porto progressed from a pulsating Champions League match on away goals as it ended 4-4 on aggregate against Juventus.

A topsy-turvy match saw chances at both ends, a red card, and five goals scored, but it was a brace from Sergio Oliveira that proved decisive.

The visitors went into the game 2-1 up from the first leg, and it was they who edged an end-to-end opening to the game as chances came at both ends right from the first whistle. And a goal from the penalty spot after 19 minutes put Porto in the driving seat, with Oliveira sending Wojciech Szczesny the wrong way after Mehdi Taremi had been fouled in the box.

Porto came out after the break looking to hold on to their two-goal advantage, but the tie was all square inside 20 minutes as a brace from Federico Chiesa brought Juventus back to 3-3 on aggregate.

And to make matters worse for the visitors, two yellow cards in the space of two minutes for Mehdi Taremi left them down to ten men with over half an hour still remaining on the clock.

It was a stunning turnaround and left the tie hanging in the balance, and the drama continued in extra-time. Oliveiraâ€™s long-range free-kick seemed to have won it with time running out, but a towering header from Adrien Rabiot set up a barnstorming finish with the game on the line. But the ten men of Porto clung on to seal a remarkable result in Turin.

Porto will have to wait a while to find out who they face next, as the draw for the quarter-finals is still ten days away. Itâ€™ll be held at UEFAâ€™s HQ in Nyon on Friday 19 March, with the ties scheduled to be played over the first two weeks of April.

Elsewhere, Erling Braut Haaland scored his 19th and 20th goals in 14 Champions League appearances as Borussia Dortmund drew 2-2 with Sevilla to progress to the quarter-finals 5-4 on aggregate.

The 20-year-old striker opened the scoring on 35 minutes with what was his only touch in the opposition's box in the first half, Marco Reus' pull-back finding the Norwegian for an easy tap-in past goalkeeper Yassine Bounou.

If Haaland's 19th Champions League goal was simple, his 20th was a test of nerve in the face of drama.

Early in the second half, he bullied his way past the Sevilla defence to find the net from a tight angle only to have the goal ruled out for a foul. But the video assistant referee awarded a penalty for a shirt-pull by Jules Kounde on Haaland in the build-up.

The Norwegian took the spot-kick himself and saw both his first attempt and his follow-up saved by Bounou.

The spectacle did not end there, however, as VAR determined Bounou had moved too early off his line and the penalty was taken again, with Haaland finally slotting home to give Dortmund a 5-2 advantage in the tie.

Sevilla kept their hopes alive through a Youssef En-Nesyri penalty, before the same man's powerful header deep in added time made the final moments nervy for the Bundesliga side.

Dortmund have reached the last eight of the Champions League for the first time since the 2016-17 season and will find out their opponents when the draw is made on 19 March.