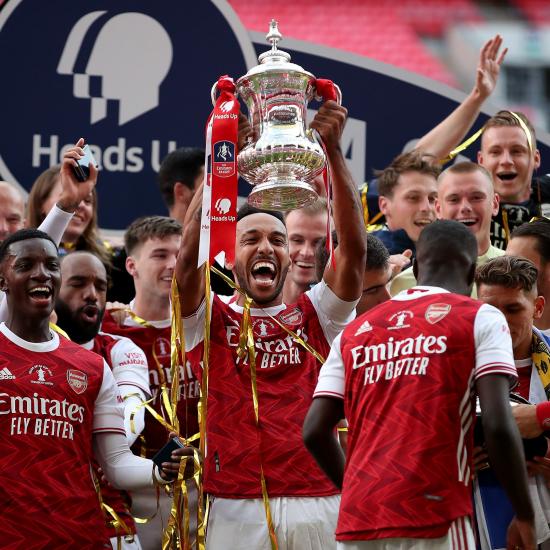 Chelsea took the lead inside the 5th minute through Christian Pulisic but Aubameyang’s first-half penalty and second-half chip carried Mikel Arteta to his first trophy as Arsenal boss.

Frank Lampard opted to name an unchanged side from the one which secured a top four finish against Wolves last week, after Willian failed to win his race to be fit.

However, in the Brazilian’s absence Pulisic proved he was up to the challenge as he became the first American to score in the FA Cup final in the 5th minute.

The 21-year-old received the ball from Olivier Giroud before skipping past the Arsenal defence and blasting across goal and into the back of the net to get Lampard’s side off to the best possible start.

Yet, instead of being deflated by the goal Arsenal clawed their way back into the game and thought to have equalised in the 23rd minute when Nicolas Pepe’s spectacular curled into the top corner but Alexander Lacazette was judged offside in the build up.

It was not long before Arsenal got their equaliser as Aubameyang slotted beyond Willy Caballero from the penalty spot after Cesar Azpilicueta dragged him down inside the box.

Things then went from bad to worse for the Chelsea captain as the foul on Aubameyang caused Azpilicueta to injure himself and be replaced by Andreas Christensen in the 35th minute.

Conceding and losing their captain left the Blues bewildered for the rest of the first half as Arsenal dominated possession and looked the hungrier of the two sides before Anthony Taylor blew for half-time.

Pulisic attempted to lift his side immediately after the break but his energy backfired as he pulled up after making a run and was forced off.

Both sides wrestled for momentum until Aubameyang stepped up to grab the headlines with a sublime dink over Caballero in the 67th minute.

Chelsea’s afternoon then took another turn for the worst when Taylor brandished a second yellow card for Matteo Kovacic for a challenge on Granit Xhaka which brought the west London side down to ten men.

Lampard's side pushed on in the final minutes of the game despite being a man down but the challenge turned out to be too big for Chelsea as Arsenal rode out the pressure to claim the victory and a place in next season's Europa League.