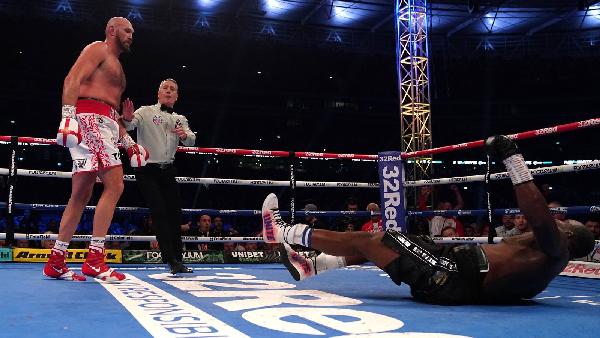 Tyson Fury sensationally knocked out Dillian Whyte in the sixth round to retain his WBC heavyweight title in front of a 94,000 sell-out Wembley.

Fury floored Whyte with a stunning uppercut with a second to go in the sixth round. He staggered to his feet, but was badly dazed and the referee rightly ended proceedings.

Whyte had surprisingly started the fight as a southpaw in the opening round, a move which seemed to rattle Fury initially, before switching back to orthodox in the second.

Whyte was guilty of swinging wildly in the next couple, while Fury settled into his work and ominously began to find his range, connecting with a couple of decent right hands on Whyte.

Tensions boiled over in the fourth and Whyte lashed back with an elbow, unhappy after picking up a cut above his right eye following a clash of heads.

Water then appeared to be thrown in the Fury corner as the pair again had to be separated after both delivered some blows to the back of the head.

Whyte was rattled in fifth, throwing punches off balance, and he eventually walked into a devastating knockout blow in the sixth.