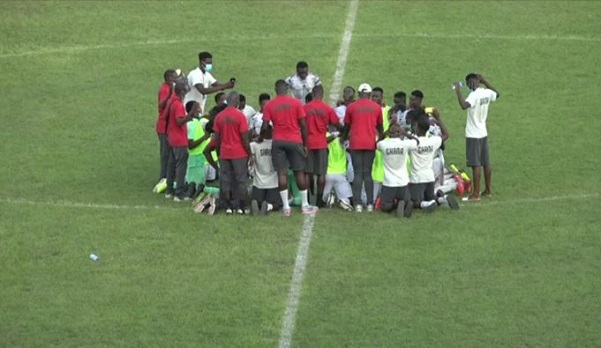 Precious Boah’s late free-kick gave Ghana a 1-0 win over Nigeria at the ongoing WAFU Zone B U-20 Championship in Benin.

The Satellites scored the only goal of the game in the 77th minute. The slim win gave Ghana a sweet revenge against one of the country’s old nemesis, Nigeria.

Ghana had put in a very good display stopping the attacks of Nigeria and creating spaces behind their defence but the Satellites failed to take their chances.

The win qualified Ghana to the semi-final stage of the competition as Nigeria bow out after drawing their first game against Ivory Coast.

This is a reversal of the trend in 2018 when Nigeria beat Ghana to qualify for the Africa U-20 Cup of Nations. The Black Satellites had an average first half showing with Nigeria dominating play. But the backline of Ghana did exceptionally well to stop the Eagles from scoring.

Mathew Anim Cudjoe, Sulleymana Mohammed, Captain Daniel Afriyie Barnieh and Precious failed t sparkle in the game especially in the first half as the Nigerians took control of possession, threatening the goal area of Ghana. But that did not yield any result before the break.

Back from recess, the Satellites improved their play and began to create some chances.

Coach Abdul Karim Zito brought more width to the team as he introduced Abdul Mugeese Zakaria in the second half.

The Eleven Wonders wide man, made a beautiful run in from the left flank into the middle and was brought down for a free kick inside the 76th minute.

Precious Boah unleashed an absolute beauty into the net beating the Nigerian goalkeeper much to the delight of the Ghana bench.

The goal scorer was however sent off minutes after scoring the goal when he received a second booking for non-sporting conduct to trigger his marching orders.

Ghana played the remaining minutes with ten men but held on solidly to ensure they ended the game with their solitary lead.

The win qualifies Ghana to the next stage while a draw in the next game against Ivory Coast will be enough to cement first place in Group B.

For Nigeria, the defeat sees them eliminated from the competition.