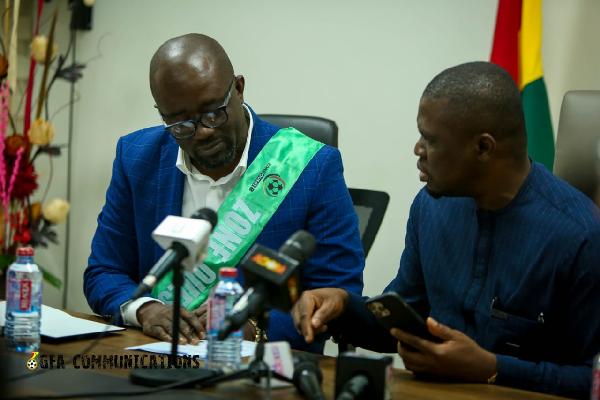 The Yabaga-Kubore law maker was speaking at a media engagement in Accra when President Simeon-Okraku called on him at the Ministry to officially inform him about his re-election as President of WAFU Zone B.

‘’On behalf of H.E the President of the Republic Nana Addo Danquah Akufo Addo, the good people of Ghana and on my own behalf, let me congratulate my brother Kurt Okraku for this wonderful achievement again’’ he said.

‘’In fact, I had no doubt at all that the entire WAFU Zone B would give him another term because of what I have seen him do in Ghana’’.

‘’Together we have worked so hard in this country so when he took the mantle to serve the remaining term of the previous President, he exhibited commitment, hard work and dedication to the WAFU community and I didn’t have any doubt that when the time comes again for them to look for a new leader, they were going to overwhelmingly endorse him’’.

‘’I was not surprised when nobody showed up to contest him because you can’t contest a committed and dedicated President’’.

‘’We know you are going to make us proud, you an ambassador of the country, you have the support of the Ministry of Youth and Sports and the entire country’’.

‘’I know very soon we shall call on H.E the President to officially inform him of your achievement. This is a big achievement for all of us as far as football and the sports industry is concerned and the President is going to be excited to hear this good news’’.

‘’But he is already aware and has asked me to extend his congratulatory message to you on behalf of the people of Ghana for this wonderful achievement. We have our differences but when it comes, we always work to resolve them amicably in the interest of football and the entire country’’.

‘’We wish you well, it is our expectation that you go higher and higher’’ he added.

Kurt Edwin Simeon-Okraku will stay in the position until October 2026.