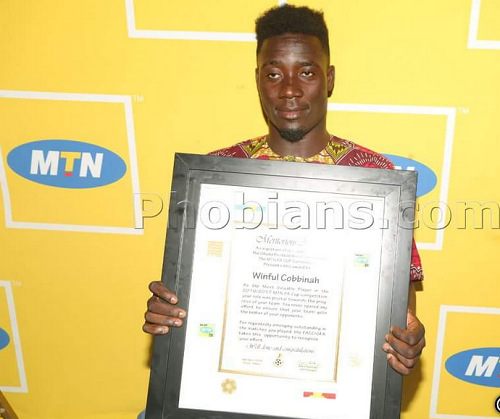 Accra Hearts of Oak midfielder Winful Cobbinah has won the Most Valuable Player at the MTN FA Cup Awards held on Wednesday, March 5, 2018, at the M Plaza Hotel in Accra.

The seventh edition of the MTN FA Cup Awards was held to honour outstanding and deserving players, coaches, match officials and other significant stakeholders.

Best Player of the Year - Winful Cobbinah (Hearts of Oak)

Supporters Group of the Year - Hearts of Oak fans

Referee of the Year - Awal Mohammed

Most Promising Player of the Year- David Abagna (Wa All Stars)

Coach of the Year - Steve Pollack