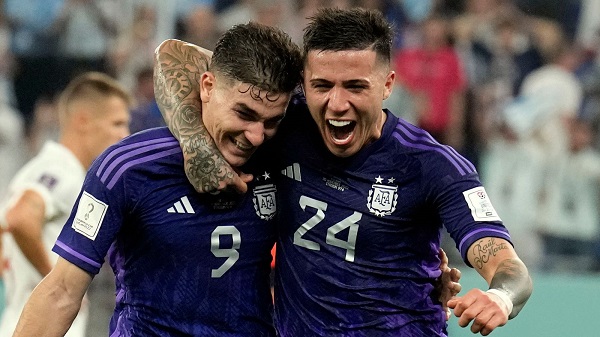 Argentina have won Group C with a 2-0 victory over Poland at a lively Stadium 974, but the European side still progress as runners-up on goal difference.

Lionel Messi - on his 999th career appearance - missed a first half penalty, but Brighton’s Alexis Mac Allister finally broke the deadlock a minute after the restart and Julian Alvarez, of Manchester City, added a superb second.

Lionel Scaloni’s side advance to the last 16 as the group winners and will now prepare to face Australia, the runners-up of Group D, on Saturday at 7pm (GMT).

Poland take second place in the group ahead of Mexico after Saudi Arabia scored late on in the other match in the group. They are rewarded with a round-of-16 match against reigning champions France.

It was all one-way traffic with a desperate Argentina piling on the pressure and it was a particularly busy opening 45 minutes for Poland’s shot-stopper Wojciech Szczesny.

The Juventus goalkeeper denied frontman Julian Alvarez, but it paled in significance compared to his next save.
After a lengthy VAR review, a controversial penalty was awarded to Argentina, with Szczesny adjudged to have fouled Messi. But the Poland no.1 kept out the 35-year-old’s spot-kick with an excellent one-handed stop.

The relief was palpable inside a predominantly Argentina-supporting Stadium 974 when Mac Allister made the breakthrough as he slotted home Nahuel Molina’s cross.

Alvarez put the game to bed with a stunning finish, holding off Aston Villa’s Matty Cash before turning and smashing the ball past a helpless Szczesny.

With Mexico leading by two goals in the other game and, at that stage, needing just a one-goal swing, Poland were extremely fortunate that substitute Lautaro Martinez screwed a gilt-edged opportunity wide, and moments later Jakub Kiwior scrambled Nicolas Tagliafico's effort off the line.

It was an anxious wait as Poland awaited the outcome of the Mexico - Saudi Arabia game and there were jubilant scenes when their place in the next round was finally confirmed.