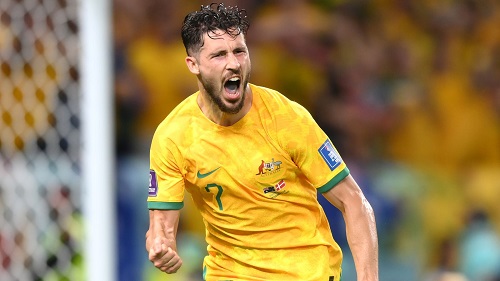 Australia dumped Denmark out of the World Cup after Mathew Leckie's strike earned a 1-0 victory and qualification to the last 16 for the first time since 2006.

Australia knew a draw would see them join Group D winners France in the knockout stages, providing Tunisia did not beat France, while Denmark had to win to have any chance of progressing.

Denmark dominated the first period but their inability to score left Australia on course to qualify until Tunisia took the lead against the world champions through Wahbi Khazri.

That goal moved Tunisia into the runners-up spot in Group D momentarily until Leckie weaved into the Denmark area and finished past Kasper Schmeichel (60) as Australia moved back into second, and a resolute defensive display ensured it was not surrendered.