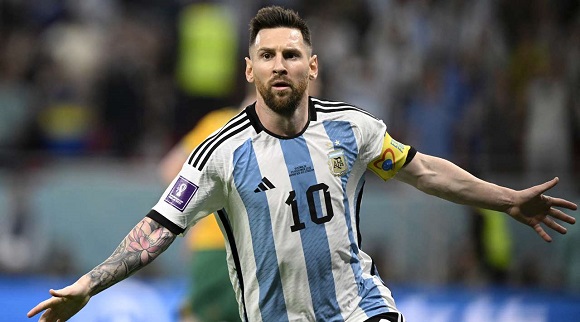 Lionel Messi starred on his 1000th career game as Argentina edged Australia 2-1 to set up a quarter-final with the Netherlands at the 2022 World Cup.

The first half was a slow affair with both sides struggling to get on the ball and create any concrete chances. Argentina lacked urgency and intensity, Australia lacked creativity in attacking areas.

But a moment of magic from Messi sparked the game into life on 35 minutes. He played a cute give-and-go before finding a yard of space to stroke a trademark low finish into the bottom corner. The goal from Messi was the only shot on target for either side in what was a lacklustre first half of football.

Argentina scored their second following a moment of madness from Mat Ryan. After a heavy touch the Australia goalkeeper tried to take it past two Argentina players but Julian Alvarez was on hand to pinch it and guide it into the back of the net.

Australia managed to pull one back 13 minutes from time, Craig Goodwin fired a shot from distance that was going well wide before taking a wicked deflection off Enzo Fernandez and ending up in the back of the net.

Just a few minutes later they nearly had an equaliser, Aziz Behich embarked on a Messi-esque run, jinking past several Argentina players and into the box before Lisandro Martinez came in with a superb last-ditch tackle.

Australia teenager Garang Kuol almost sent the game into extra time in the dying seconds but Emi Martinez reacted brilliantly to smother his shot as Argentina held on.