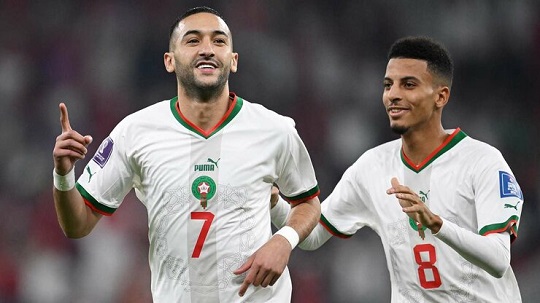 First-half goals from Hakim Ziyech and Youssef En-Nesyri helped Morocco to a 2-1 win over Canada that saw them secure top spot in Group F and a place in the last 16 of the World Cup for the first time in 36 years.

Morocco were drawn in a tricky group, including Croatia and Belgium, who finished second and third in 2018 respectively, but took four points off the European sides before holding on for victory against Canada in their final group game.

Morocco will now play the runners-up in Group E - either Spain, Japan, Costa Rica or Germany - with that group being concluded on Thursday evening.

READ ALSO: World Cup 2022: Australia through to last 16 as Denmark dumped out

Morocco will now play the runners-up in Group E - either Spain, Japan, Costa Rica or Germany - with that group being concluded on Thursday evening.

A victory for Croatia over Belgium - who faced off at the same time as Morocco played Canada - could have seen the North Africans drop to second, but it was the Croatians who finished as runners-up after drawing 0-0 with Roberto Martinez's outfit, who crashed out at the group stage.

Canada, playing at their first World Cup since 1986, pulled a goal back shortly before half-time when Nayef Aguerd inadvertently turned Sam Adekugbe's cross into his own net, but ultimately finished bottom of the standings, without a point.